2020 is a year that most of us will never forget. The ongoing pandemic has affected all our lives in more ways than one. In the world of mobile app developers, both Google I/O and WWDC did not have an in-person conference this year. While Google I/O was completely cancelled, WWDC took a fully online format this year. However, all of this did not stop both Google and Apple from releasing pre-release versions of their new mobile OSes to developers this year. In this post, we will assess the new changes and features in both iOS 14 and Android 11 and the compatibility of Mobile Foundation SDKs with Android 11 and iOS 14.

Apple announced a feature-packed iOS 14 during their annual WWDC 2020 conference on 22 June, 2020. A slew of new iOS 14 features that is inviting a lot of interest from the developer community are App Clips that allows users to use an app without downloading it. Widgets allow Apple users to display information from an app without the user having to start the app on their home screens. App Library will automatically organize apps into folders based on their functions. Privacy will give more transparency to user and control over their personal information. Apple has changed its App Store policy to require apps to ask users before tracking them across apps and websites owned by other companies. As a developer, you will want to take a thorough look at the changes to user privacy and its impact on your apps.

You can read more about all the new features in iOS 14 here.

​ Here are some notable feature compatibility tests that were performed with Mobile Foundation v8.0. ​

We encourage you to start testing your application(s) with iOS 14 Beta and Android 11 Beta.

Due to iOS 14 Local Network Privacy Restrictions, you might hit the following error in your dev/test environment while connecting to Mobile Foundation server that is running on a local network.

You must choose OK to allow the app to access the local network. 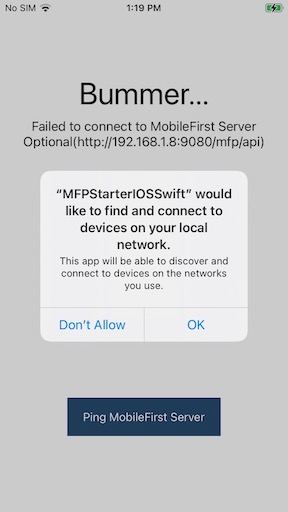 We encourage you to start testing your applications with new builds of Android 11 and iOS 14. We would love to hear back from you.

After upgrading to Android 11, if the targetSdkVersion of the app is set to API Level ‘30’, while attempting to click send button from inappfeedback popup, app crashes with NullPointerException as stated below, due to updates of toasts feature in android 11

This issue has been fixed on following levels of android library.

Please use above levels which contains fix for this issue.

When an app built using gradle plugin >= v3.6.0 and gradle version >= v5.6.4 and if application authenticity feature is turned on in the Mobile Foundation server, the app crashes with following error during runtime. This issue is being investigated. To overcome this issue, use a lower version of gradle plugin and gradle while building the app.

The issue happens when the Manifest.MF file is not present in the application binary. Earlier Gradle versions (prior to 4.x) used to package Manifest.MF file by default and this is not happening with recent Gradle version 4.x. This in-turn causing the above issue. For more details on this issue refer Known Limitations section. Also see this open issue on the Android Issue Tracker.

Stay tuned for further updates, as we continue to update our findings on Android 11 beta and iOS 14.

Disclaimer: Some of the action items that are mentioned in the list above are not under IBM’s control. Therefore, we expect developers and IT managers to ensure that their infrastructure is up to date according to Apple’s requirements.