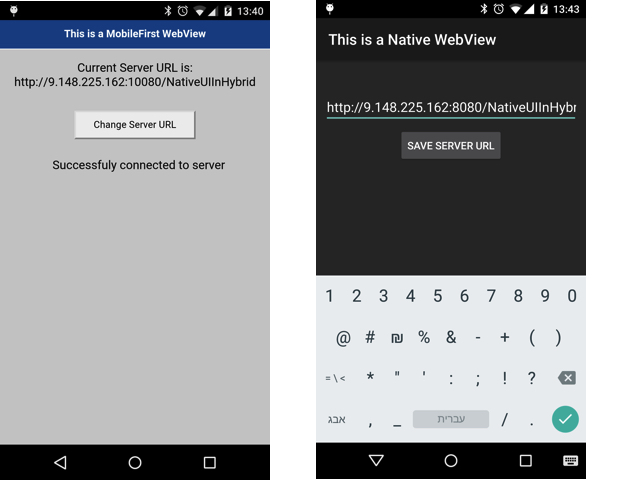 First we call the getServerURL() function that uses the WL.App.getServerUrl() API
To get the current server URL.
Then we update the currentServerURLDiv content accordingly.
After that we use WL.Client.connect() to connect the MobileFirst server
And use it's onSuccess/onFailure callbacks to update the ConnectionStatusDiv content.

When the button is clicked, the sendActionToNative method is called.
This method has 2 parameters - the first is the requested action - in this case "displayNativeScreen".
The second parameter is a JSON Object to pass data to the native code.

The code also registers an action receiver to reload the application
After changing the server URL from the native code.

The ActionReceiver class implements the onActionReceived method. This method is used to receive the requested action (displayNativeScreen) that was passed in the JavaScript code. We used the JSON object that we passed from the JavaScript code to indicate which native screen do we want to open,
In case we have a few.

The server URL screen (serverurlActivity) includes an EditText, which displays the current server URL that you can edit, and a button to save the new server URL. After you press the button, this activity finishes and the onActivityResult() method in the Main Activity (SendAction) is called. This method sets the new server URL by using setServerUrl() API and sends action to JavaScript to reload the application by using the sendActionToJS() API.