This tutorial assumes that you know how to create a MobileFirst hybrid application and add Android and iPhone environments. For more information, see the following tutorials:

Using this tutorial and its associated sample

Dojo provides mobile widgets that developers can use to quickly generate mobile views.

JSTL provides a simple API for iterating over lists to generate Dojox Mobile list items dynamically on the server.

IBM Mobile Conference application requires users to be registered and authenticated with the enterprise that is hosting the application. The application is protected by a form-based login, by using a mobile web form that is contained within a Dojox Mobile view.

This tutorial comes with a MobileFirst project called ContainerForAdvancedPages, which contains an AdvancedPages hybrid application. This application already has the iPhone and Android environments added to it. 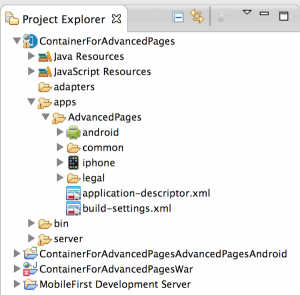 Running the sample on an Android environment

After the application is installed, authenticate with a username and password, such as admin / admin, or whatever credentials you specified in your server.xml file.
Each view for the IBM Mobile Conference app is loaded through Ajax XHR where each view is generated by the JSP responsible for each distinct view.

Running the sample on an iPhone environment 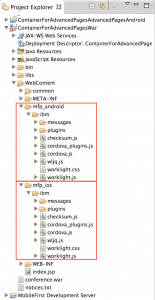 IBM MobileFirst Platform provides client libraries for hybrid application development. Although the APIs are platform-neutral, they are often backed by platform-specific implementations. Because the conference app is served remotely, these client-side libraries must be packaged with the conference app (WAR). Each platform-specific implementation is in its own folder structure in the web application.

When the IBM Mobile Conference application completes the authentication process, the mobile device client initializes the device with the server by using WL.Client.init(). This provides a flexible model for application integrity validation, application updates, and other features.

The Encrypted Offline Cache (EOC) API is used for securely storing data by using HTML5 local cache. The Conference app uses EOC to save a list of favorite sessions in a secure way. 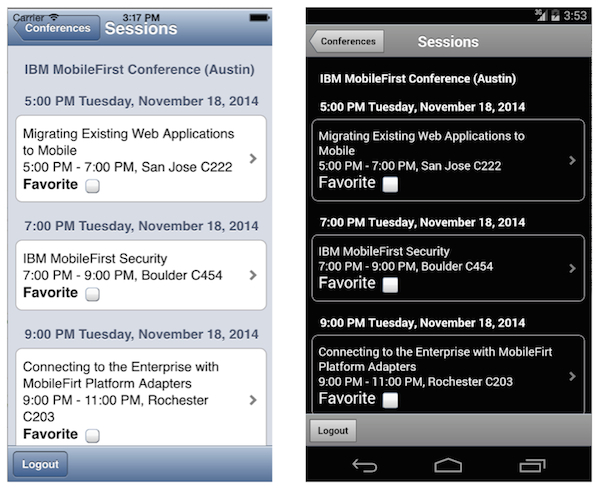 Use the IBM MobileFirst Client API to extend the application to take photos of the conference. The application has a social aspect, where users can view photos from the other conference attendees. 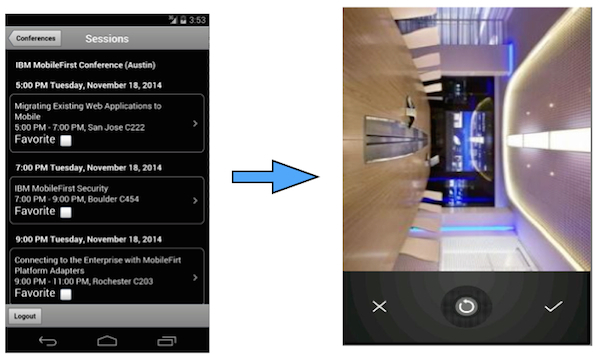 Download the MobileFirst project and the server WAR project.