To add an environment:

Navigate to the Hybrid application and add an environment:

Structure of the new application 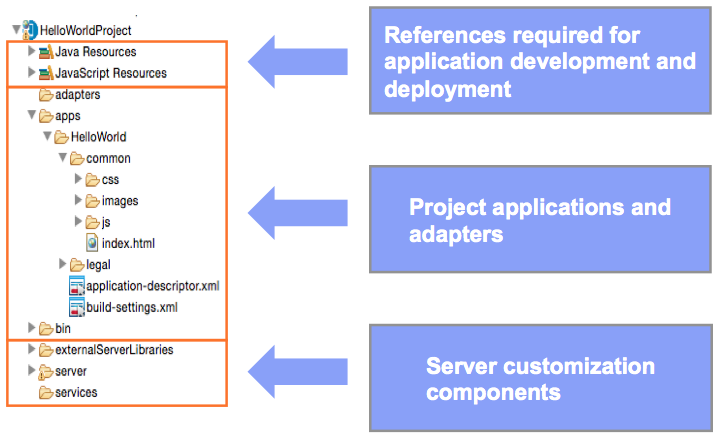 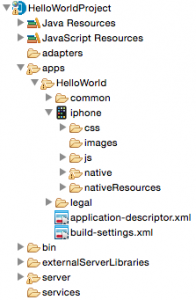 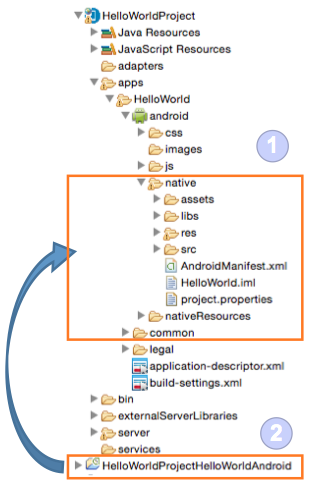 The screen shot to the right depicts the iPhone environment, but the explanation below applies to any mobile environment (iPhone, iPad, Android, BlackBerry, Windows Phone 8, Windows 8).

Note about Android
After you add the Android environment, an Android project is generated and added to the workspace.
This project folder does not contain a copy of the application code. Rather, it is mapped to the native folder within the android folder of the application.

The bin folder contains project artifacts that are deployed to MobileFirst Server.
MobileFirst Studio deploys those artifacts to the embedded MobileFirst Development Server automatically as a part of the build process.

The application descriptor is an XML file that stores the metadata for an application.
You can edit this file in the Design or Source editors. 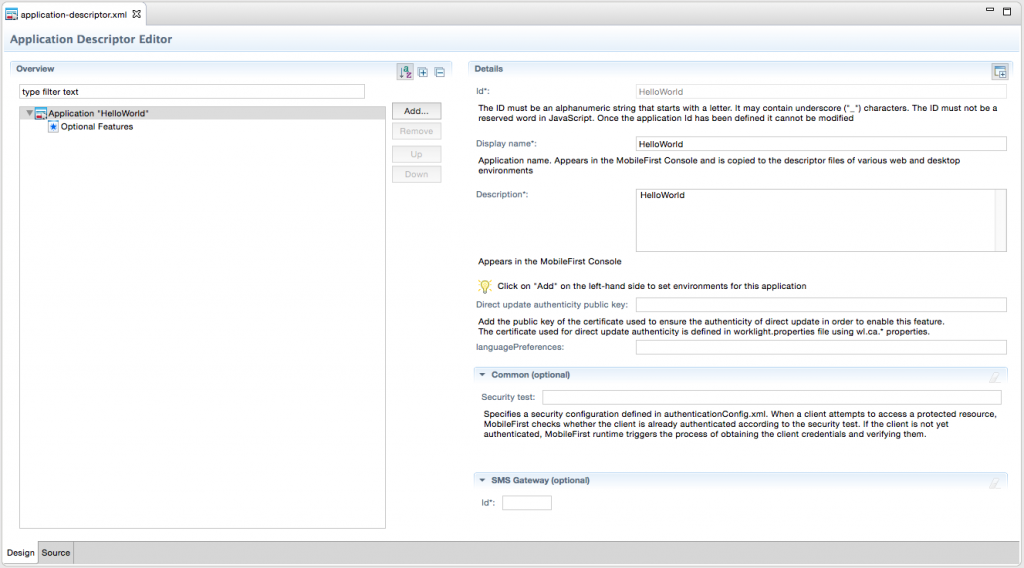 The file is based on the W3C Widget Packaging and Configuration standard and contains application properties that are used at build time.
You can specify the application description, details about the author, the thumbnail image to be displayed in the MobileFirst Operations Console, and more.

Environment-specific information is inserted automatically as new environments are added to the MobileFirst project:

Learn more about the application-descriptor.xml file in the user documentation.

The build settings file is an XML file that contains configuration options for minification and concatenation of the Desktop Browser and Mobile Web environment web resources.
You can edit this file in the Design or Source editors.

The MobileFirst client-side framework uses the jQuery library for internal functions. By default, the $ char is assigned to the internal jQuery in the main HTML file (see below). If a different jQuery version is required or if jQuery is not required in the application, this line (#12) can be removed.

The MobileFirst client framework initialization is bound to the onload event specified in the initOptions.js file. For more information about initialization options, see the user documentation.

When you create an application, a main.js file is created and holds its JavaScript portion.
It contains a wlCommonInit() function which is invoked automatically after the MobileFirst framework initialization finishes. Application initialization code can be implemented herein.

This function is used in environment-specific JavaScript files to have a common initialization starting point. Additional details are provided in subsequent tutorials.

As discussed previously, the MobileFirst application starts in offline mode by default.
To begin communicating with MobileFirst Server, follow the instructions provided in the default wlCommonInit() function:

To build an application, right-click the application name and select Run As > Run on MobileFirst Development Server.

While the application is being built and deployed, you can monitor the progress in the Eclipse Console view.
After the build completes, the application is available for preview in the catalog tab of the MobileFirst Operations Console. 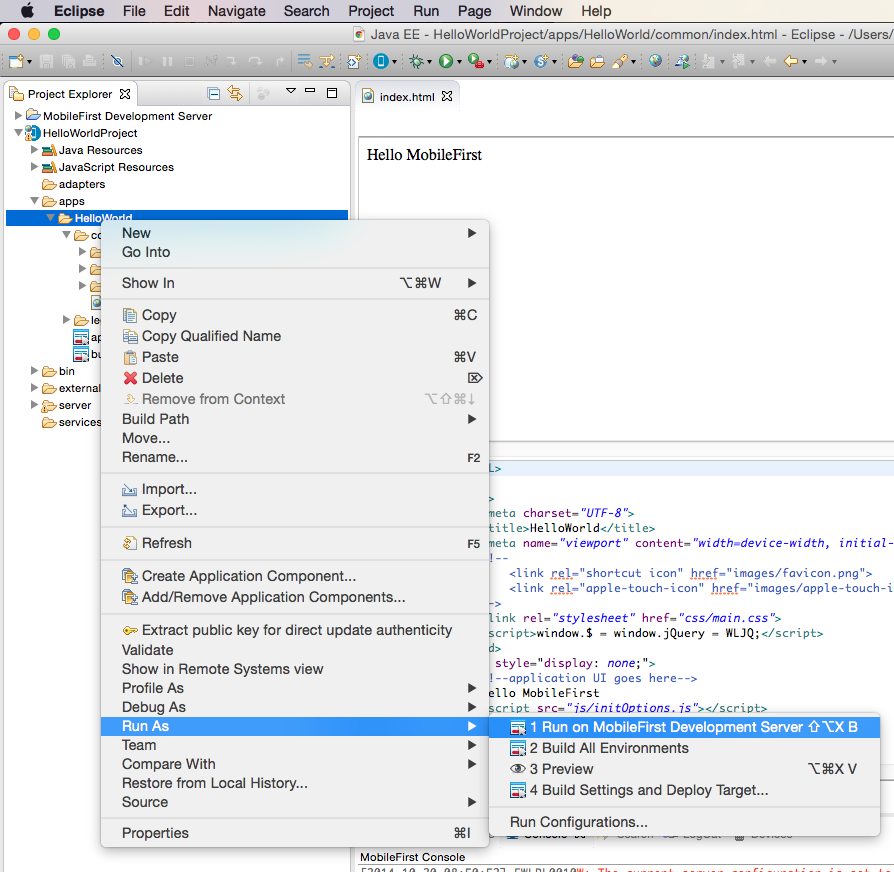 The single DOM model means that navigation between various HTML files must not be implemented by using hyperlinks or by changing the window.location property.
Instead, you can implement a multipage interface by loading an external HTML file content through Ajax requests and by injecting it into an existing DOM.

Such implementation is required because the main application HTML file loads the MobileFirst client-side JavaScript framework files. If the webview navigates away from one HTML file to another, the JavaScript context and loaded scripts are lost.

From the application preview, use the preview command, and select preview mode: Simple preview or MBS.

To preview the application's common resources from the Studio, right-click the common folder and choose Run As > Preview.

If you are presented with a login screen, use admin/admin as the username/password.

To learn more about previewing, see the Previewing your Hybrid Application tutorial. 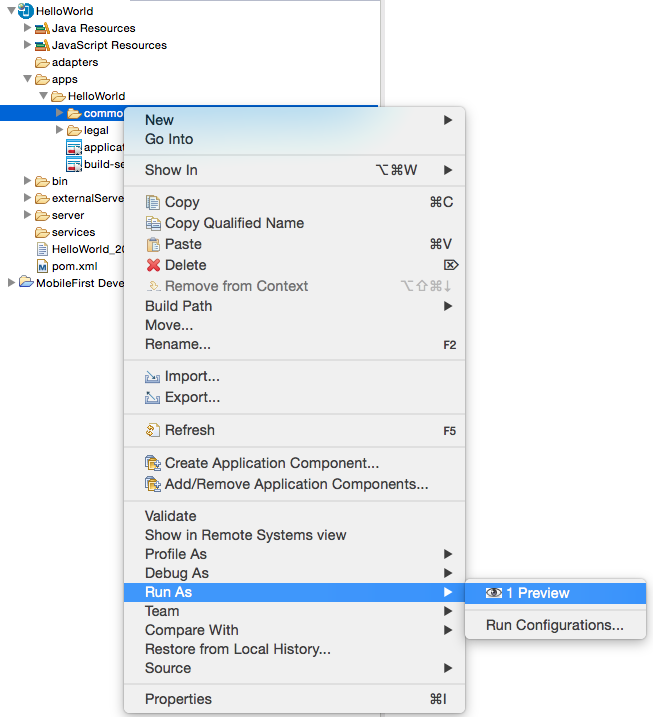