Prerequisite: Make sure to read the Adapters Overview tutorial first. 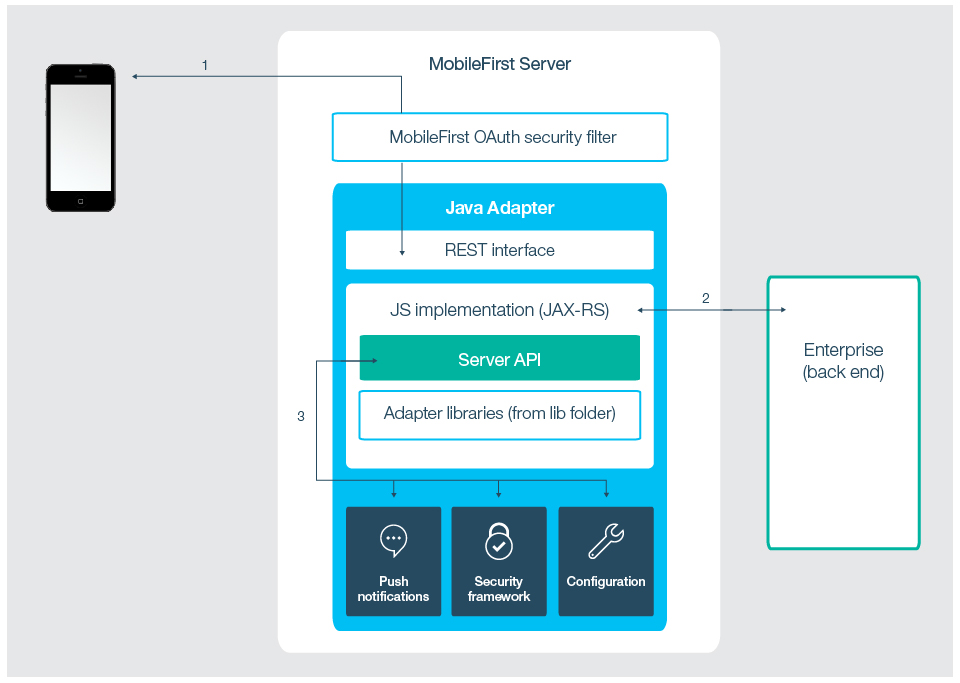 Each Java adapter has its own isolated sandbox, in which all its classes run without knowing about or interrupting other adapter sandboxes. That said, adapters can still communicate with one another by calling API which makes "adapter mashup" possible. 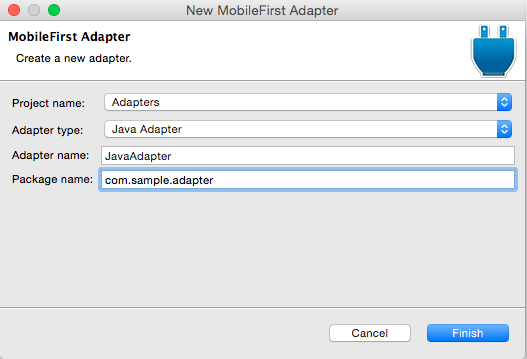 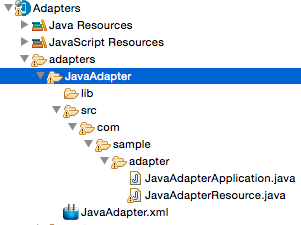 Java adapters have an XML configuration file such as all the other types of adapters. In this configuration file, configure the class name of the JAX-RS application for this adapter.
In our case: com.sample.adapter.JavaAdapterApplication.

In this folder, put the Java sources of the JAX-RS service. JAX-RS services are composed of an application class (which extends com.worklight.wink.extensions.MFPJAXRSApplication) and resources classes.

In the lib folder you can put JAR library files that will be available in the adapter's class path at run time. Note that these JAR files are loaded in the private class loader of the adapter as parent last. This setting means that the JAR files override any libraries provided by the container.

The JAX-RS application class tells the JAX-RS framework which resources are included in the application.

The MFPJAXRSApplication class scans the package for JAX-RS resources and automatically creates a list. Additionally, its init method is called by MobileFirst Server as soon as the adapter is deployed (before it starts serving) and when the MobileFirst runtime starts up.

JAX-RS resource is a POJO (Plain Old Java Object) which is mapped to a root URL and has Java methods for serving requests to this root URL and its child URLs. Any resource can have a separate set of URLs.

@Path("/") before the class definition determines the root path of this resource. If you have multiple resource classes, you should set each resource a different path.

For example, if you have a UserResource with @Path("/users") to manage users of a blog, that resource is accessible via http(s)://host:port/ProjectName/adapters/AdapterName/users/.

That same adapter may contain another resource PostResource with @Path("/posts") to manage posts of a blog. It is accessible via the http(s)://host:port/ProjectName/adapters/AdapterName/posts/ URL.

In the example above, because there it has only one resource class, it is set to @Path("/") so that it is accessible via http(s)://host:port/Adapters/adapters/JavaAdapter/.

Each method is preceded by one or more JAX-RS annotations, for example an annotation of type "HTTP request" such as @GET, @PUT, @POST, @DELETE, or @HEAD. Such annotations define how the method can be accessed.

Another example is @Path("/{username}"), which defines the path to access this procedure (in addition to the resource-level path). As you can see, this path can include a variable part. This variable is then used as a parameter of the method, as defined @PathParam("username") String name.

You can use many other annotations. See Annotation Types Summary here: https://jsr311.java.net/nonav/releases/1.1/javax/ws/rs/package-summary.html

Depending on your infrastructure and configuration, your MobileFirst server may be running with SessionIndependent set to true, where each request can reach a different node and HTTP sessions are not used.
In such cases you should not rely on Java's HttpSession to persist​ data from one request to the next.

Java adapters can use the MobileFirst server-side Java API to perform operations that are related to MobileFirst Server, such as calling other adapters, submitting push notifications, logging to the server log, getting values of configuration properties, reporting activities to Analytics and getting the identity of the request issuer.

To get the server API interface, use the following code:

The WLServerAPI interface is the parent of all the API categories: (Analytics, Configuration, Push, Adapters, Authentication).

If you want, for example, to use the push API, you can write:

For more information, review the Server-side API topics in the user documentation.