App Transport Security is one of the new features enforced by Apple to improve secure communications between App and Web Services. This feature is available from iOS 9 or later. This post talks about how to enable transport security on IBM MobileFirst Platform Servers.

App Transport Security, in simple words, mandates the application to communicate with a web service over TLS version 1.2 protocol and use connection ciphers that provide forward secrecy. This means the developer has to ensure that the web service to which his application is communicating is deployed on a web server that supports TLS version 1.2 and forward secrecy. For more information, see Apple's Technote on App Transport Security

As of today, if the web server is not ready, the developer can override this default behavior and turn off the transport security, which is not recommended.

More details on how to turn off transport security and server setup requirements are listed in the post, ATS and Bitcode in iOS 9.

The post also talks about how the developer can switch off the transport security using the NSAllowsArbitraryLoads exception property, so that the application can communicate with the server in the development environment. The development server in the IBM MobileFirst Platform Studio eclipse and the Command Line Interface (CLI) do not support App Transport Security.

This post shows how to set up transport security in test and production environments. Reiterating the requirements,

Although the settings are made on the web server to enable App Transport Security, Java is the underlying technology which should support this communication. The supported editions are:

The policy files for IBM JDKs can be downloaded here. There are two files, US_export_policy.jar and local_policy.jar. The developer can use the policy files in either of the following ways:

Note: The listed policy settings are not required if developer chooses to use any of the other accepted ciphers other than the ones mentioned above.

Certain countries restrict certain cryptography under their jurisdiction. Hence, it is the responsibility of the user to ensure proper adherence to the law.

The Web Servers listed in the IBM MobileFirst Platform requirements page will work with the JDKs listed in this blog.

Ensure that the generated certificates as per requirements are ready. The following ssl_cert.p12 is the keystore that has the personal certificate and ca.crt is the signing certificate.

Add the below lines to the server.xml file.

IBM MobileFirst Platform versions 6.2 and 6.3 do not work if the server is forced to work with TLS version 1.2. Set sslProtocol to SSL_TLSv2. This protocol name is an alias and will work for SSLv3 and all 3 versions of TLS.

Open NodeDefaultSSLSettings -> Quality of protection (QoP) settings. Choose Protocol as SSL_TLSv2. Choose Cipher suite groups as Custom and click on Update selected ciphers button. Use the Add and Remove button to make sure accepted ciphers are in the selected ciphers list. Apply the settings.

WebSphere Application Server's own services require other versions protocol for communication. Enforcing the server to work with only TLS version 1.2 will interfere with stopping and starting the server. 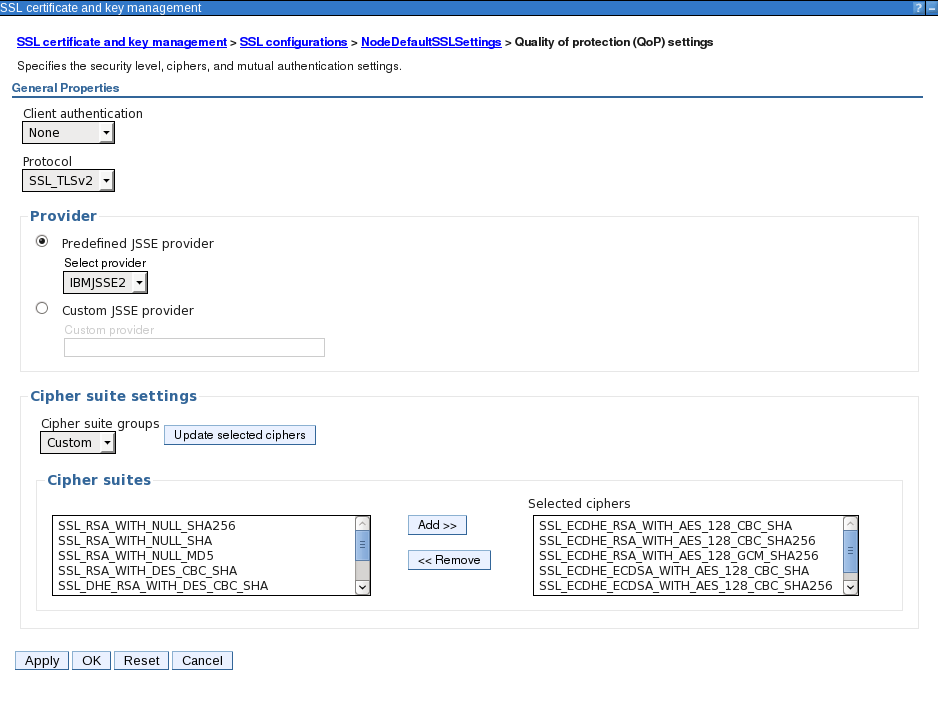 Save all the settings. Open the ssl.client.props file. The file will be at WASServerProfileDirectory/properties/ssl.client.props. Uncomment the property com.ibm.ssl.enabledCipherSuites=SSL_ECDHE_RSA_WITH_AES_128_CBC_SHA and set it to one of the ciphers from the selected ciphers list.

Uncomment the Load Module to load the ibm_ssl_module as shown above.
Point the KeyFile to the new kdb file, key database file created using ikeyman.
SSLCipherSpec is set to TLSv12 and the cipher it should use. This ensures the HTTP Server communicates over TLS version 1.2 protocol using the specified cipher.

Rest of the HTTP Server's proxy configuration or load balancing can remain the same.