The feature of automated sync in JSONStore is available in native iOS, native Android, Cordova iOS and Cordova Android platforms. Details on enabling this feature can be found here and in this post. This blog post provides details regarding the performance of the JSONStore automated sync feature on Android and iOS devices.

Factors and assumptions involved in the performance analysis

The devices used for testing are Apple iPhone 6 plus running iOS 8.0 and Mi A2 running Android 8.1.0 OS. The Cloudant DB is located in the Dallas region. The WiFi network used for the testing has a download bandwidth of 38 Mbps and upload speed of 8 Mbps. The 4G connections are on a moderate strength network. The time measurements have been calculated in seconds using a javascript stopwatch and the time considered is from the button click on the client app(for initialization/add/update or delete) to when the client app receives a response from Cloudant DB on the same network on which the request has been made.

The readings are provided for for encrypted and unencrypted data on JSONStore.

Downstream sync is when data on Cloudant DB is fetched and added to the local JSONStore collection. Observations have been made for the time taken for 1, 5 and 10 records of size close to 1 MB each and another data set of 1, 10, 100 and 1000 records of size 1KB and 100KB each. It is to be noted that on a 4G network, when the Cloudant DB has around 1000 records each of size close to 100 KB, the downstream sync does happen successfully, but on the JSONStore of the device, there might be a memory error while loading all this data into the JSONStore collections. 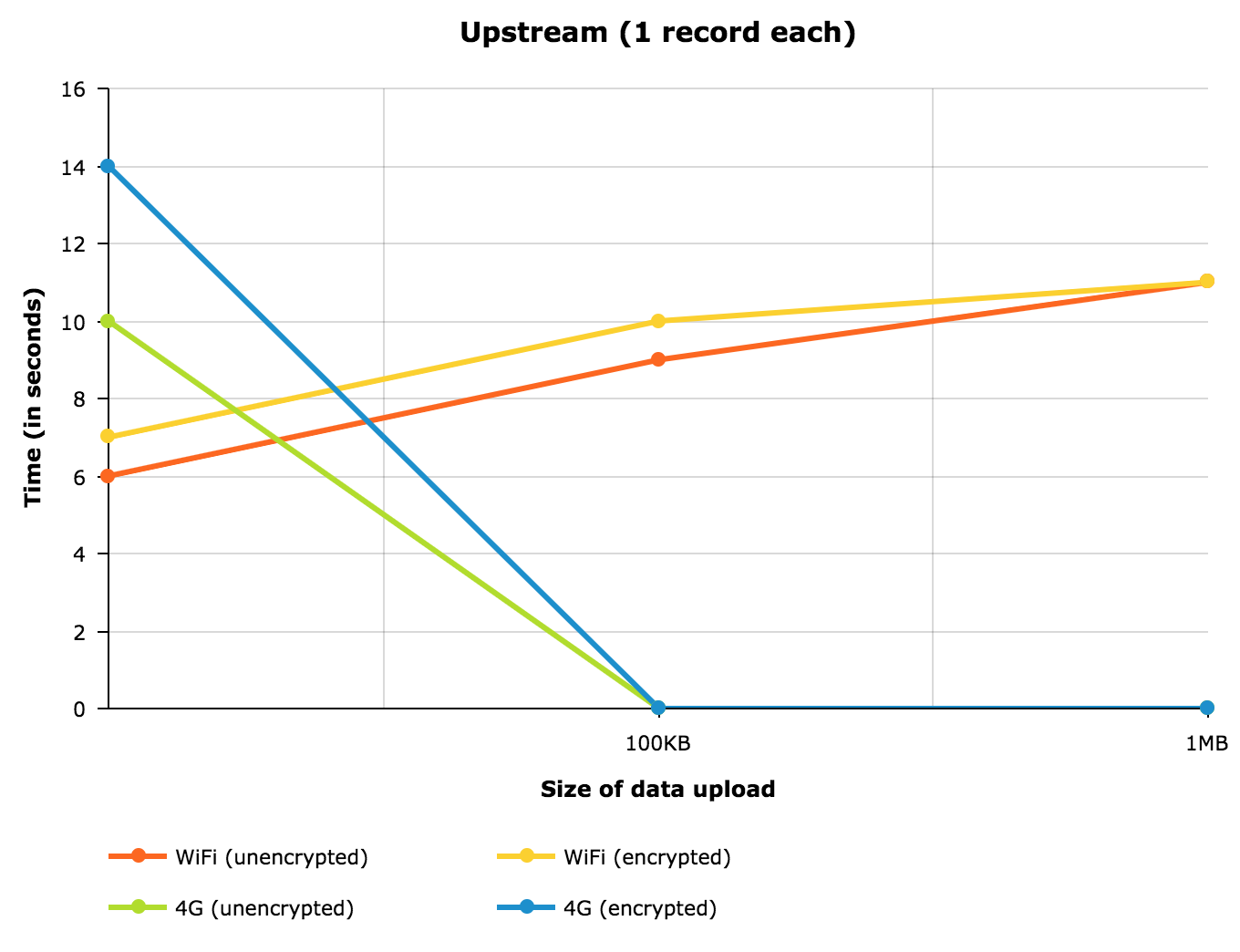 For upstream sync on poor mobile data networks, failure has been observed even for a record of size 100 KB. For large documents of size nearly 1 MB, for both upstream and downstream, the sync has been successful when on WiFi networks and the sync success rate is poor on 4G mobile data networks. Hence in conclusion, the best performance for both upstream and downstream sync is observed when the device is connected to a stable WiFi network and when record sizes are small (less than 100 KB). The chances of failures is high when record size is large (nearly 1 MB) and the device is connected to a poor mobile network.

Scenario 1 : App pushed to background when sync in progress - When the app is pushed to the background, the adapter call fails and the sync does not complete.

Scenario 2 : App killed when sync in progress - On a real device and simulator, if the app is killed, before the response is received, then the app’s jsonstore does not store any records and works as expected. But when the received data is being added to the app’s local jsonstore and the app is killed midway, the new docs are added.

Scenario 1 : App pushed to background when sync in progress - When the app is pushed to the background, the adapter call fails and the sync does not complete.