While you can write hybrid application by using solely web technologies, IBM MobileFirst Platform Foundation also allows you to mix and match native code with web code as needed.

For example, use native UI controls or native elements, provide an animated native introduction screen, etc. To do so, you must take control of part of the application startup flow.

When you create a hybrid application, MobileFirst Studio generates a main CordovaActivity class (appname.java) which handles various stages of the application startup flow.

The showSplashScreen method is called to display a simple splash screen while resources are being loaded. You can modify the location with any native introduction screen.

The application contains an InitiativeActivity activity. This activity is used to show a simple text view and a button as our customized splash screen:

In the onCreate method:


And in the onClickListener method: The text view and the button are also added to the activity layout file:

It is also required to add an Intent to the MainActivity before the call to the initializeWebFramework method. The intent loads the newly created activity instead of opening the default MobileFirst splash screen.

The doSomething parameter is an arbitrary action name to be used in the native side (see Step 2). The second parameter is a JSON object that contains any data.

For the action receiver to receive actions from the MobileFirst Web View, it must be registered. The registration can be done during the startup flow of the application to catch any actions early enough:

For the action receiver to receive actions, it must first be registered. This should be done early enough in the JavaScript code so that the function handles those actions as early as possible. 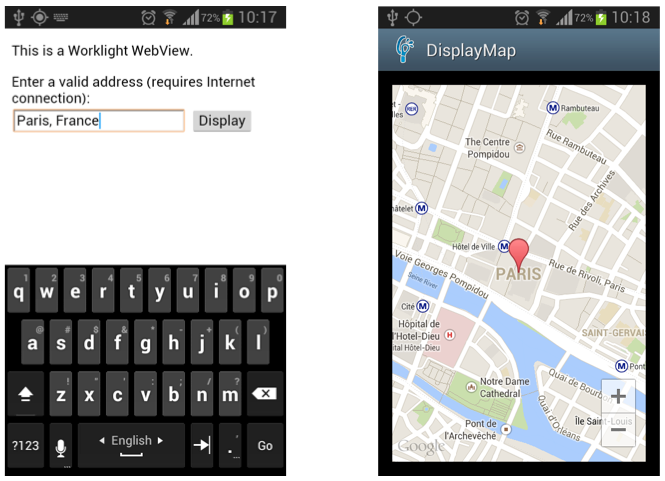 Download the NativeUIInHybrid project, which includes a hybrid application called SendAction.
This sample uses the MapView and the Google Maps services.

Note: This sample will NOT work without the following extra steps to install the MapView.

For more information about the MapView and Google Maps services, see the Google Map Android page at https://developers.google.com/maps/documentation/android/
This sample includes an additional FragmentActivity (DisplayMap) to display the requested map.

A new class is required. It implements WLActionReceiver.
Before using this new class, call the addActionReceiver method to register ActionReceiver in the main activity after the initialization process is complete.

The ActionReceiver class implements the onActionReceived method. This method is used to receive the address that was passed in the JavaScript code.

After the address parameter is received, a FragmentActivity instance is needed to display it.
This activity uses the GoogleMap services and the Google Geocoder to display the requested address on a map.

The address parameter needs to be sent to this activity in order to display the address in the map.

HTTP requests are explained in other tutorials (both for hybrid and native applications).
IBM Worklight 6.2 and IBM MobileFirst Platform Foundation 6.3 and later keep your session (cookies and HTTP headers) automatically synchronized between the JavaScript client and the native client.