For example, use native UI controls, use native elements, provide an animated native introduction screen, etc. In order to do so, taking control of part of the application startup flow is needed. This tutorial assumes working knowledge of Windows Phone development (C#).

Send Action From JavaScript to Native

In MobileFirst applications, commands are sent with parameters from the web view (via JavaScript) to a native class (written in C#).
This feature can be used to trigger native code to be run in the background, to update the native UI, to use native-only features, etc.

Step 1
In JavaScript, the following API is used:
WL.App.sendActionToNative("doSomething", {customData: 12345});

doSomething is an arbitrary action name to be used in the native side (see the next slide), and the second parameter is a JSON object that contains any data.

Step 3
For the action receiver to receive actions from the MobileFirst Web View, it must be registered.
The registration can be done during the startup flow of the application to catch any actions early enough:


Send Action From Native to JavaScript

In MobileFirst applications, commands can be sent with parameters from native C# code to web view JavaScript code.
This feature can be used to receive responses from a native method, notify the web view when background code finished running, have a native UI control the content of the web view, etc.

Step 1
In C#, the following API is used:

doSomething is an arbitrary action name to be used on the JavaScript side and the second parameter is a JObject that contains any data.

Step 2
A JavaScript function, which verifies the action name and implements any JavaScript code.

Step 3
For the action receiver to receive actions, it must first be registered. This should be done early enough in the JavaScript code so that the function will handle those actions as early as possible. 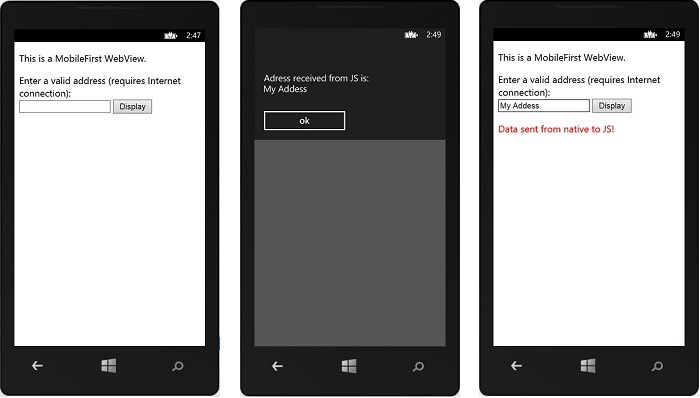 Download the NativeUIInHybrid project, which includes a hybrid application called SendAction.
In the first screen enter an address and press the "Display" button. This action will send this address to the native C# code and it will display a MessageBox that will display the address you entered. When pressing the OK button of the MessageBox the native SendAction method will be called and send a message back to the JS code that will be displayed using the actionReceiver method.

JavaScript
When the button is clicked, the sendActionToNative method is called to send the address to the native code.

HTTP requests are explained in other tutorials (both for hybrid and native applications).
IBM MobileFirst Platform Foundation 6.2 and later keeps your session (cookies and HTTP headers) automatically synchronized between the JavaScript client and the native client.