With Direct Update, hybrid applications (for the Android, iOS and Windows Phone 8 environments)s can be updated "over-the-air" with updated/refreshed versions of the web resources.

The topics covered, are:

Direct Update is based on the MobileFirst Authentication Framework. It comes with pre-defined authentication realm and challenge handler, and can be adjusted in authenticationConfig.xml to the following modes:

The UI & UX of the Direct Update process can be fully customized by using simple interfaces.

By default, the mobileSecurityTest has Direct Update enabled in perSession mode:

To Disable Direct Update, change its mode to disabled, and similarly to override it to other modes.

By default, the customSecurityTest does not have any realms.
To add a Direct Update realm to a custom security test, add a test element with the realm name wl_directUpdateRealm and define the required mode property:

The application's Web resources are initially packaged with the application to ensure first offline availability. Afterwards, the application checks for updates based on available configuration (Per session or per request as explained above). 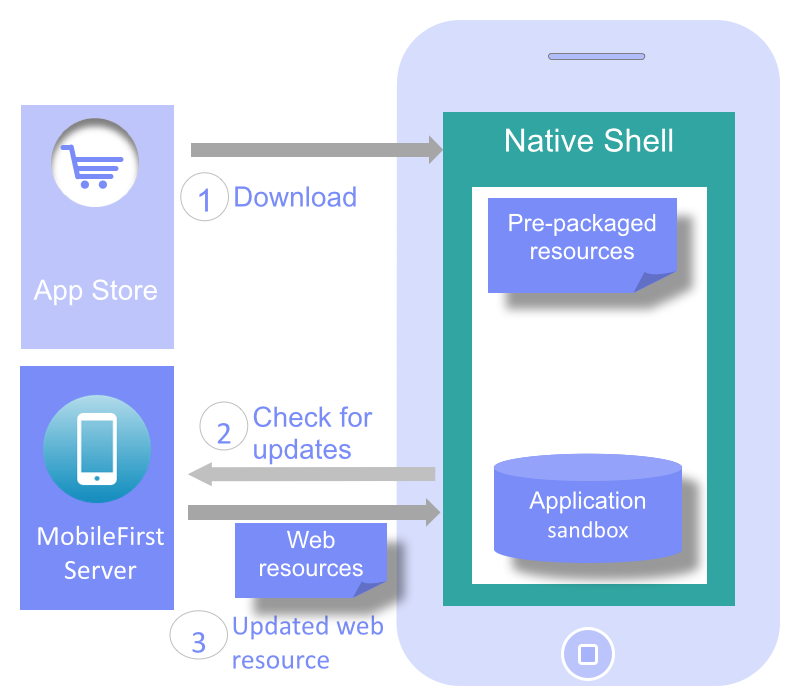 With this feature it is no longer necessary for the client application to download the entire web resources on every update. Instead, only the resources that were changed will be downloaded and updated. This reduces download time, conserves bandwidth and improves overall user experience.

There is no change in the behaviour of applications built with previous versions of IBM MobileFirst Platform Foundation.

directUpdateData - A JSON object containing the downloadSize property that represents the files size in bytes of the update package to be downloaded from the MobileFirst Server.

In the example code below a custom Direct Update dialog is presented to user, allowing to either continue with the update process or dismiss it.
A customized new Direct Update UI can be, for example, either: 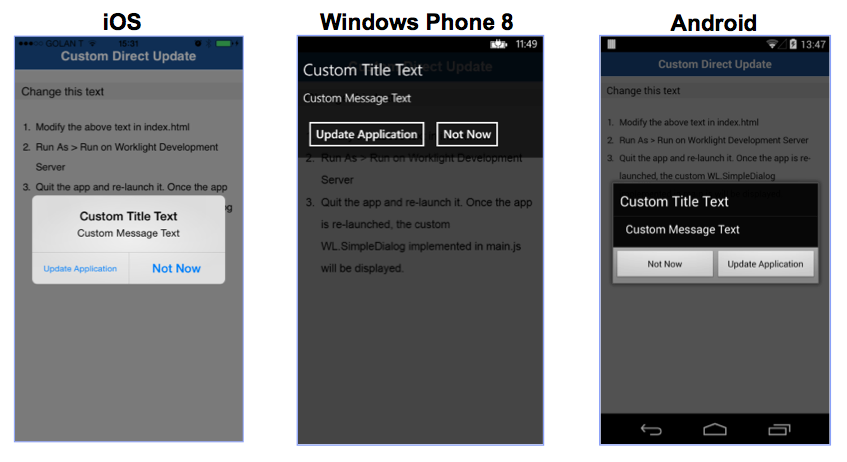 In the example code above, submitFailure was used to dismiss the Direct Update:

From the MobileFirst Console, it is possible to prevent users from using obsolete versions and to notify users about available updates.

Clarification: The Remote Disable feature only prevents users from interacting with the MobileFirst Server; that is, it prevents the app from connecting to the server. The application itself is still accessible. Any action in the application that requires server connectivity is blocked. 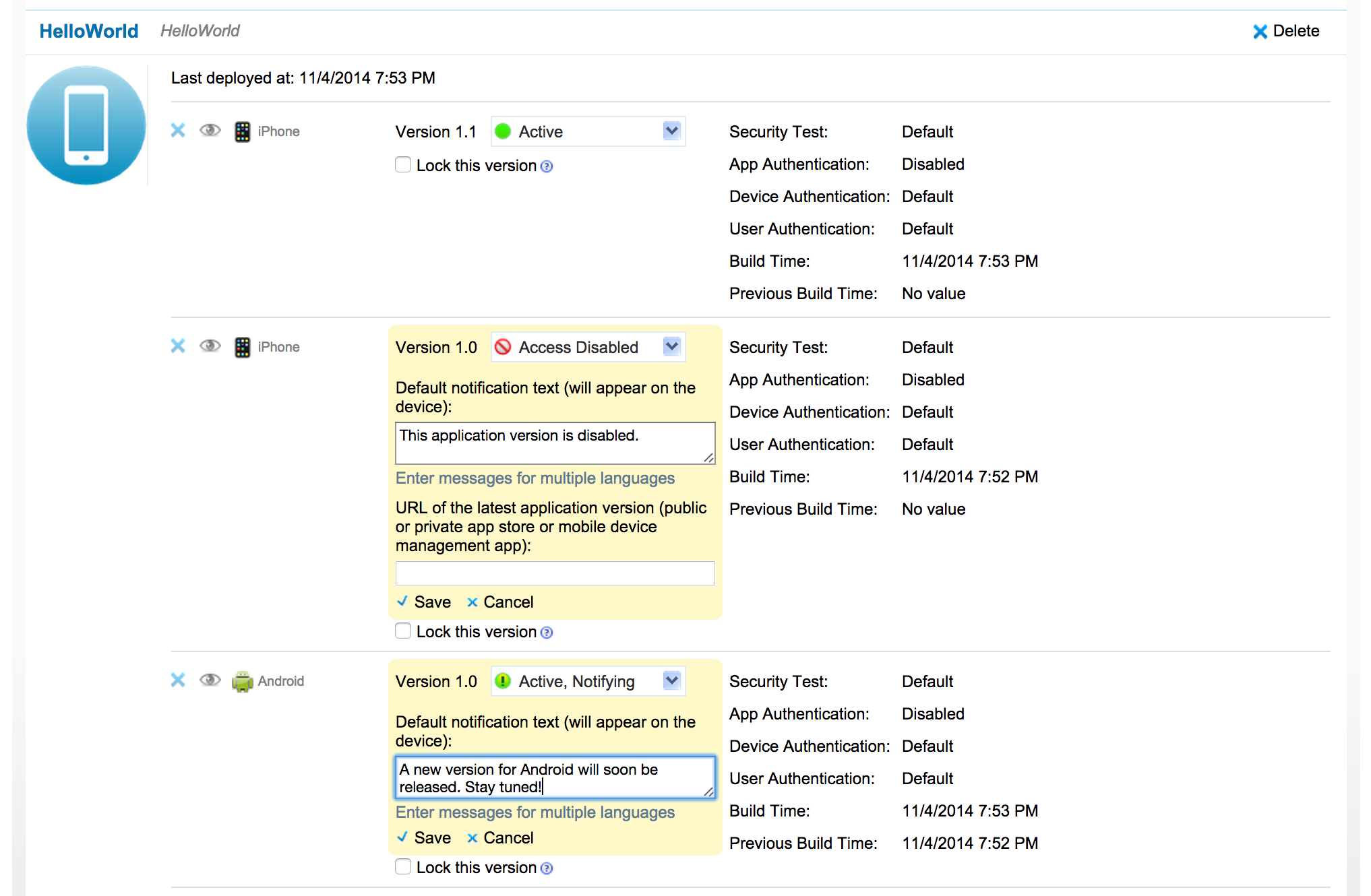 Enabling Direct Update authenticity prevents altering the transmitted web resources from the server to the client application by a 3rd party attacker (i.e., when it is cached in a CDN). 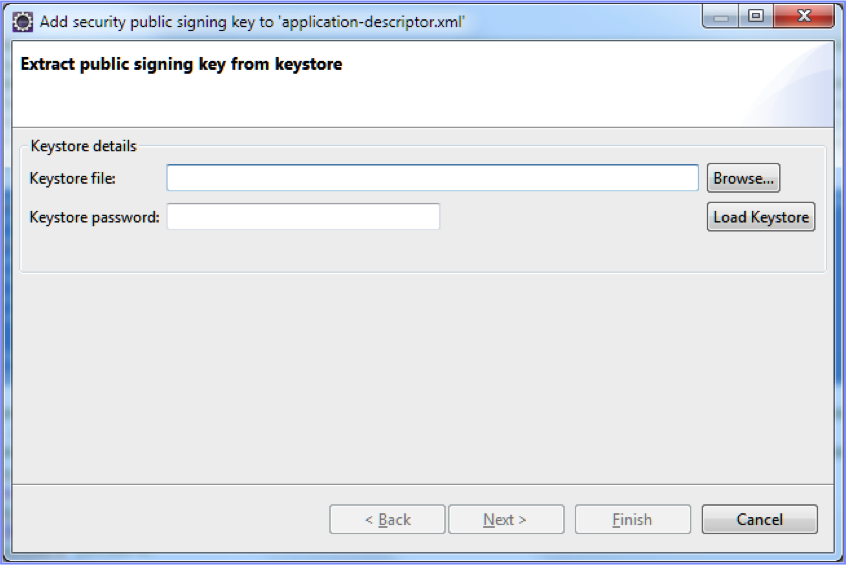 You can find the public key on the Design view of the Application Descriptor Editor.

You can also find the public key in the Source view of the Application Descriptor Editor.