In this module, you learn how to add an Android environment to your shell component, test application, and inner application.

Start by adding a new Android environment to your shell component by following the same procedure as for a standard MobileFirst application. 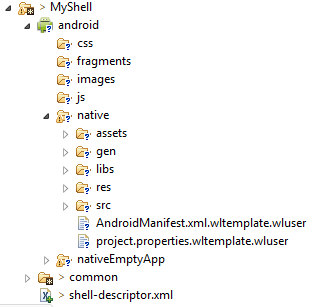 The files in the native folder are templates that are used to create the inner application Android project.
Some of the folder and file names contain placeholder elements that are populated during build. 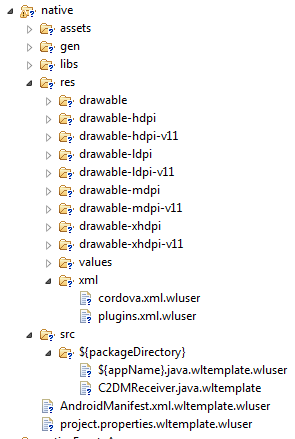 Files with the .wluser extensions are template files that shell developers can modify. 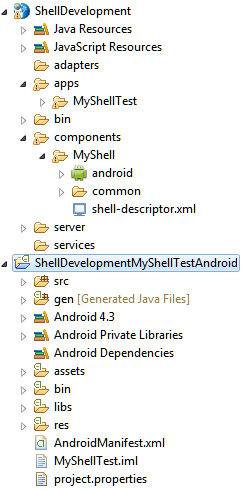 Because the android\native folder of a shell component is not an Android project, Eclipse does not provide advanced features such as auto-complete when you work on it directly.
The solution is to use the Android environment to create, modify, and debug Java code.
The generated Android project is added to your workspace.
Use it to work with your Java code.


Add the com.mycustomcode package to the generated Android project.
Add MyCustomToaster.java class under this package.
Add a static method to this class:

Run your application to see the implemented functions.

Finally, copy your Java code from the Android project that you used to develop it back to the shell component.

The custom Java classes that were added to the Android project can be copied to keep the package structure intact.
Modifications that are made to the predefined files created by MobileFirst Studio, however, must be copied manually to the corresponding template files. In this specific case, a highlighted line from the MyShellTest.java must be copied to ${appName}.java.wltemplate.wluser. 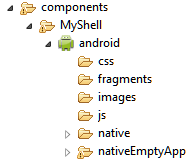 The native empty application is automatically recognized as an Android project. 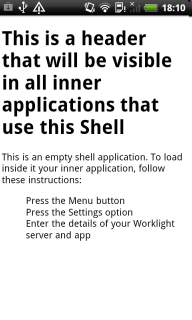 When the application is built and deployed to an Android device, click Menu and go to Settings to change the URL from which this inner application content is loaded. 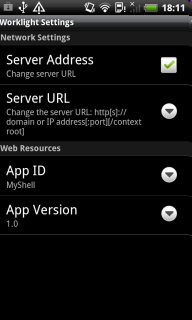