The available debugging options are:

Debugging is a process that consists of finding the cause of defects in the application code and UI.

Debugging on a desktop browser

Modern browsers, such as Chrome, Firefox, Safari or Opera, provide an easy and convenient way to debug web apps.
As seen in the previous tutorials, during development you can preview applications in a desktop browser by using the MobileFirst Console.

There are many web tools for debugging on various desktop browsers, for example: 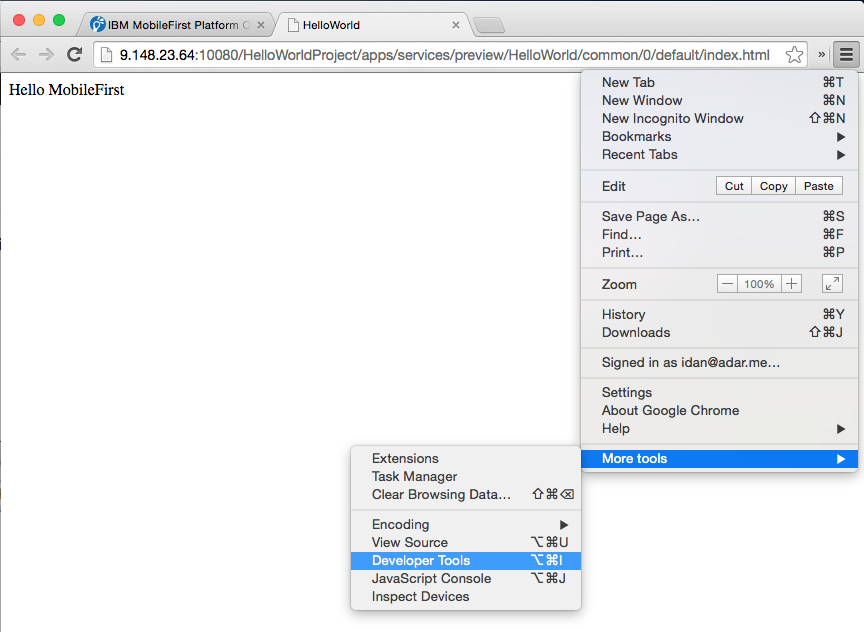 In early application development stages these tools can be used to debug the application just like a regular website. It is not required to install them in a mobile device.
Changes to HTML and CSS can also be previewed in real time by modifying the values in the inspector. 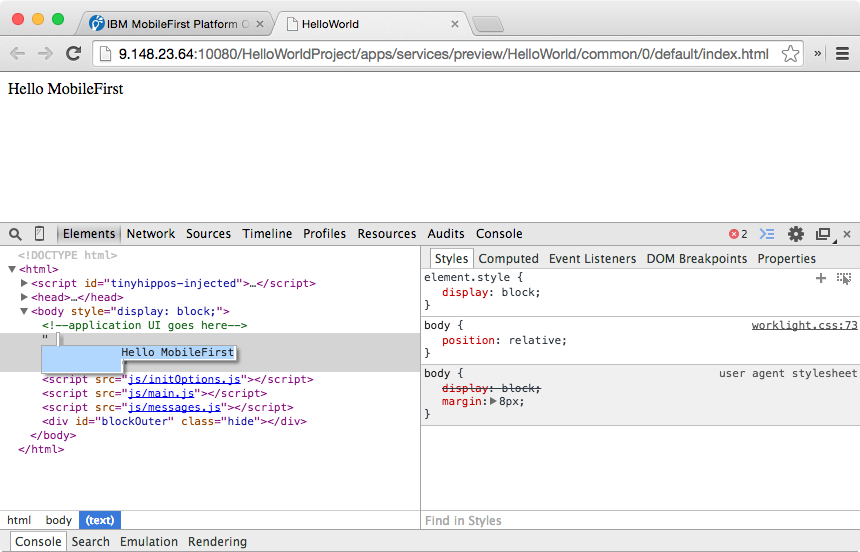 Debugging with the Mobile Browser Simulator

The Mobile Browser Simulator can also be used to preview and debug MobileFirst applications.
To access it, click on the 'eye' icon beside an environment row in MobileFirst Console.

The Mobile Browser Simulator has several added values over Preview as Common Resources, for example: 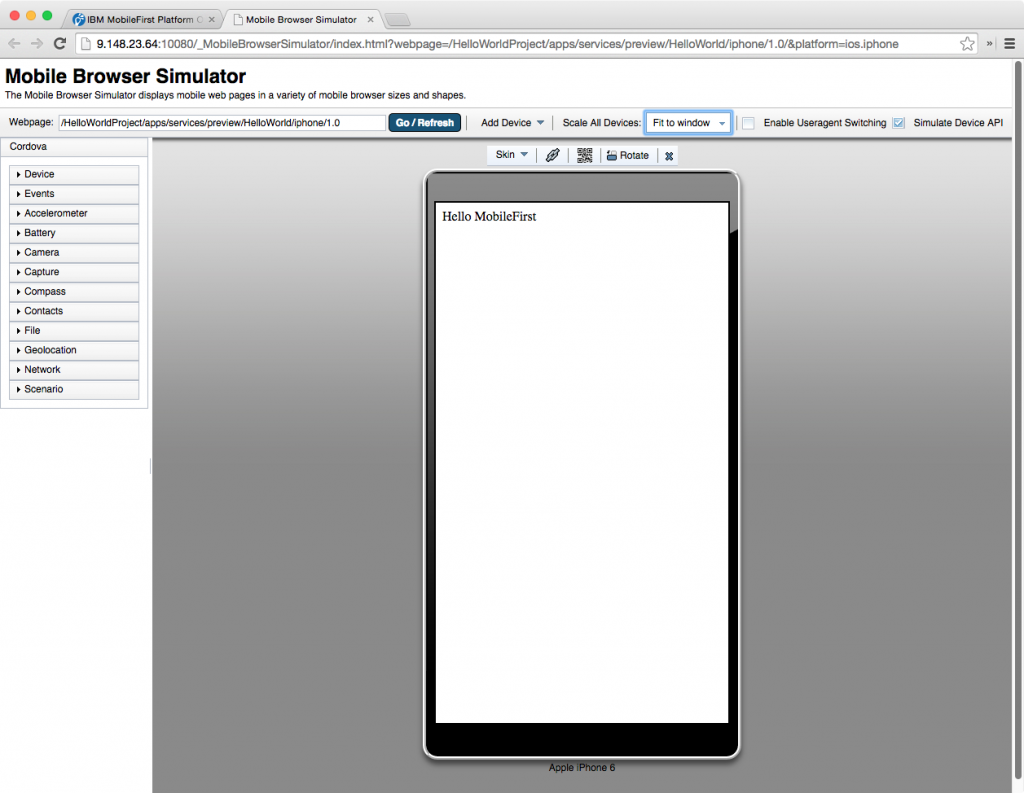 Starting in iOS 6, Apple introduced a remote web inspector for debugging web applications on iOS devices. In order to debug, make sure the device (or simulator) has “Private Browsing” turned off.

To start debugging, connect the iOS device to a Mac, or start the simulator. Safari 6.0 or higher is required.
In Safari, go to Preferences > Advanced, and select the Show Develop menu in menu bar checkbox. 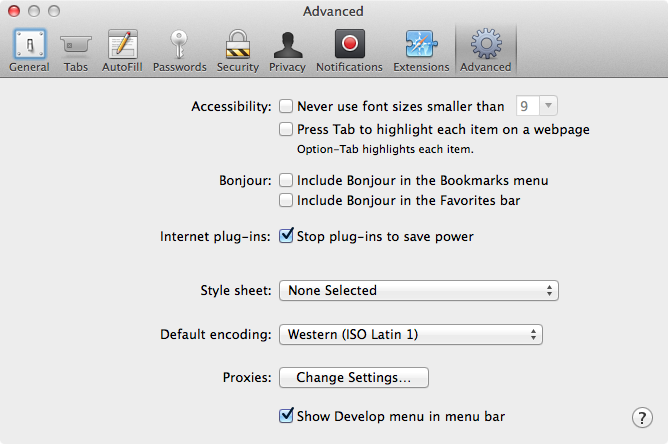 Now in Safari, select Develop > [your device ID] > [your application HTML file].
The DOM can now be inspected. It is also possible to alter the CSS and run JavaScript commands, just like in the desktop inspector. 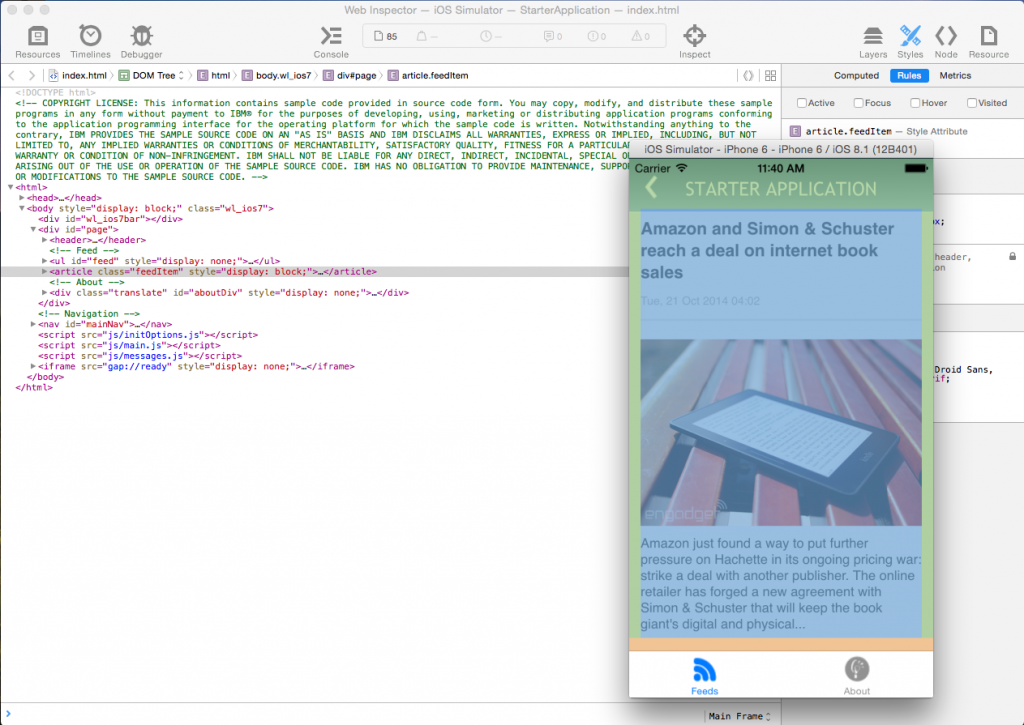 With Google Chrome it is possible to remotely inspect web applications on Android devices.
This action requires Android 4.4 or later, Chrome 32 or later and IBM MobileFirst Platform Foundation V6.2.0 or later.

Start the application in the Android Emulator or a connected device. Then, in Chrome, enter the following URL: about:inspect and then press on "Inspect" for the relevant application. All the features of the Chrome Inspector can now be used to inspect the Android application. 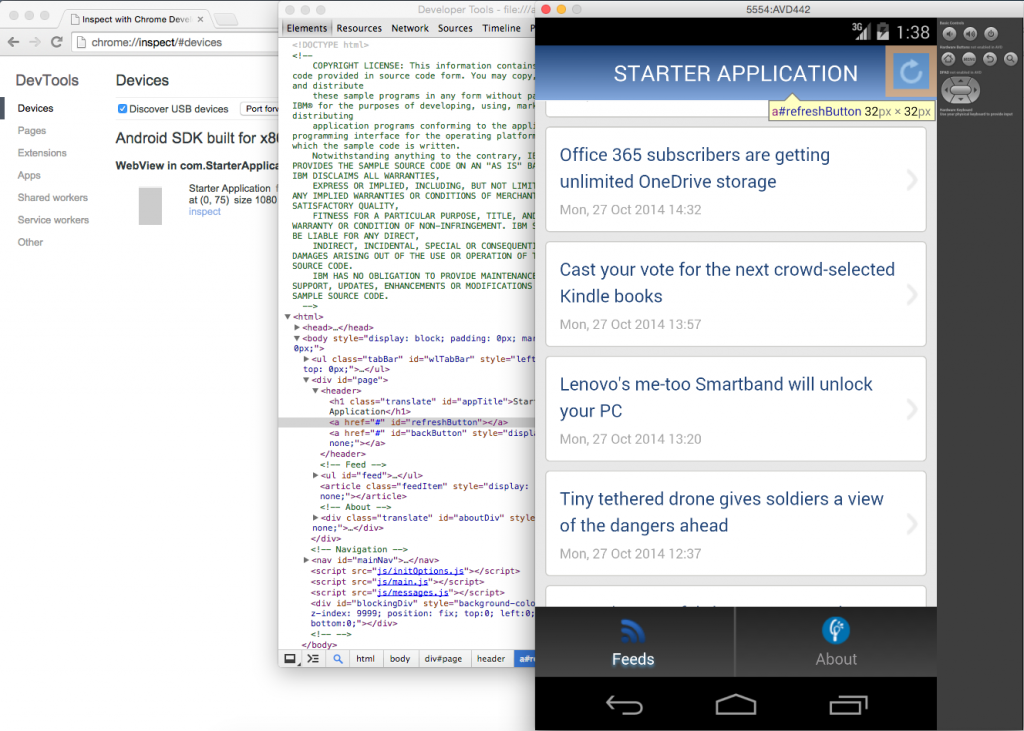 Weinre is a debugger for web pages, like Firebug or other Web Inspectors, except that Weinre is designed to work remotely.
Weinre can be used to inspect and debug web resources such as HTML, JavaScript, CSS, and network traffic on mobile handsets.

The Weinre debug server requires a node.js runtime.
Instructions to install Weinre can be found at: http://people.apache.org/~pmuellr/weinre/docs/latest/Installing.html

This command starts a Weinre server on a default (changeable) port 8888.

Target
The Weinre server must be accessible from the device that will be used for debugging. To make it accessible, add the following code line to the web application:

Where a.b.c is the hostname or IP of the Weinre server.

Client
Before you can start debugging, make sure that the application is open and loaded on the browser with this URL: 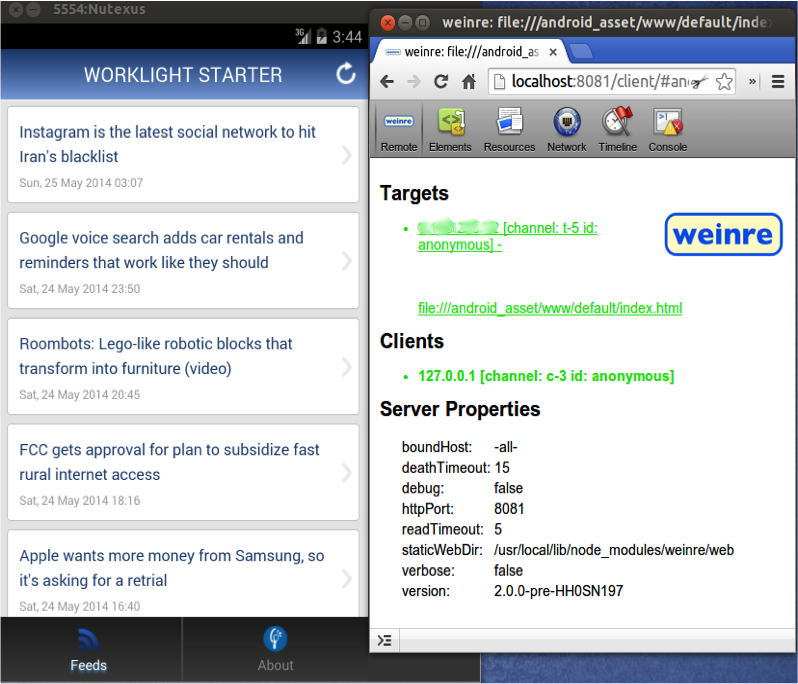 IBM MobileFirst Platform Foundation provides a WL.Logger object that can be used to print log messages to the log for the environment used.

Two of its methods are WL.Logger.debug() and WL.Logger.error().
These APIs are multi-platform. The output destination changes according to the platform on which that application runs on:

It is possible to test adapter procedures by using MobileFirst Studio.
Testing a procedure is done by right-clicking an adapter folder and selecting Run As > Invoke MobileFirst Procedure.

After selecting to invoke a procedure, the adapter and procedure are selected, followed by optionally entering comma-separated parameters. 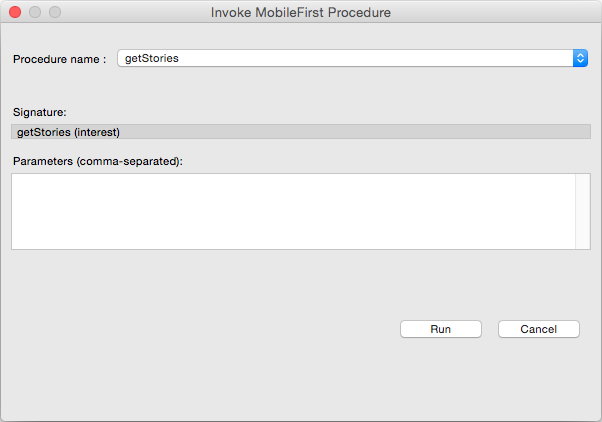 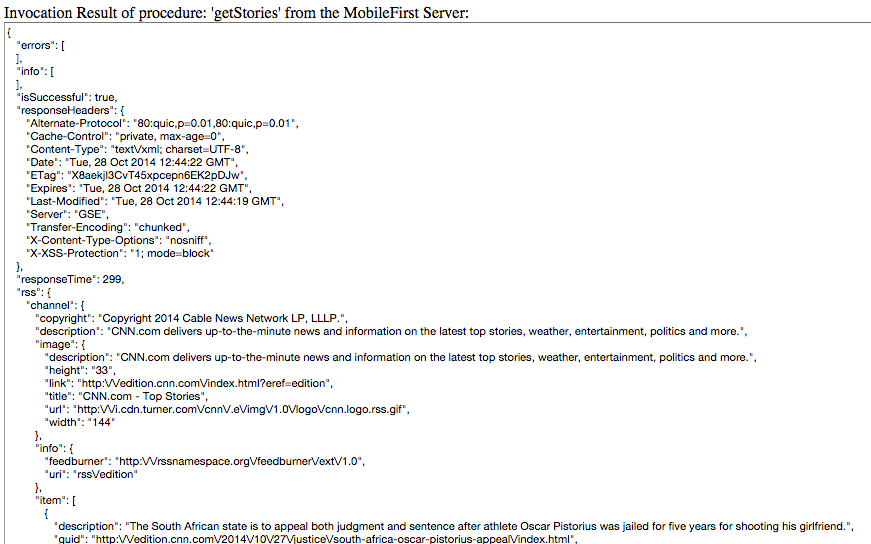 Wireshark is a network protocol analyzer that can be used to see what happens in the network.
Filtering is available to follow only what is required. 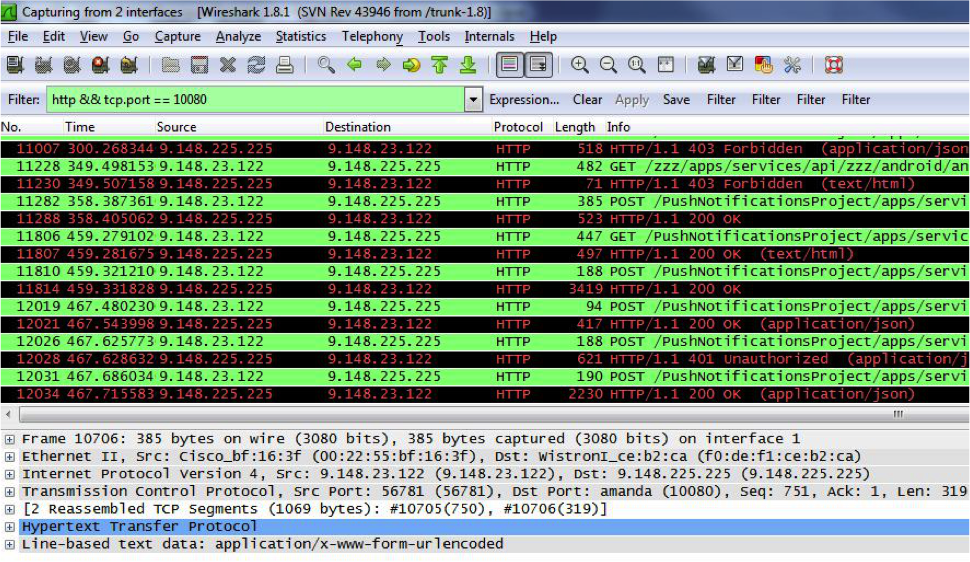