In JavaScript, the following API is used: WL.App.sendActionToNative("doSomething", {customData: 12345}); 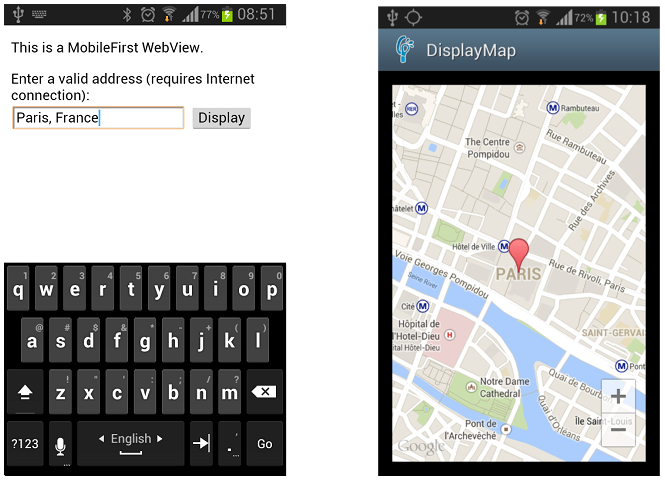 Download the NativeUIInHybrid project, which includes a hybrid application called SendAction.
This sample uses the MapView and the Google Maps services.

Important: This sample will NOT work without some extra steps to install the MapView.

For more information about the MapView and Google Maps services, see the Google Map Android page.
This sample also includes an additional FragementActivity (DisplayMap) to display the requested map. To support FragementActivity add the android-support-v4.jar from your Android-SDK extras folder.

The ActionReceiver class implements the onActionReceived method. This method is used to receive the address that was passed in the JavaScript code.

After the address parameter is received, a Fragment Activity displays it.
This Activity uses the GoogleMap services and the Google Geocoder to display the requested address on a map.

The address parameter needs to be sent to this Activity in order to display the address in the map.

Configuration of the SendAction sample

To configure the SendAction sample: