Now that basic usage of different types of adapters has been covered, it is important to remember that adapters can be combined to make a procedure that uses different adapters to generate one processed result. You can combine several sources (different HTTP servers, SQL, etc).

In theory, from the client side, you could make several requests successively, one depending on the other.
However, writing this logic on the server side could be faster and cleaner.

At the heart of this mashup scenario is the WL.Server.invokeProcedure(invocationData) API. Almost identical to its client-side counterpart, it enables you to invoke a procedure on any of your adapters.

The invocationData parameter has the same format as the client-side API.

However, while the client-side invokeProcedure uses a success handler, the server-side one returns the result object itself.

The following example shows how to mash up data from two data sources and to return the data stream to the application as a single invocationResult object.

Data mashup can be implemented in the same way for any number of data sources and across different adapter types.
As an example, mash up data from the following sources:

Afterward, the mashed-up data is returned to the application for display. 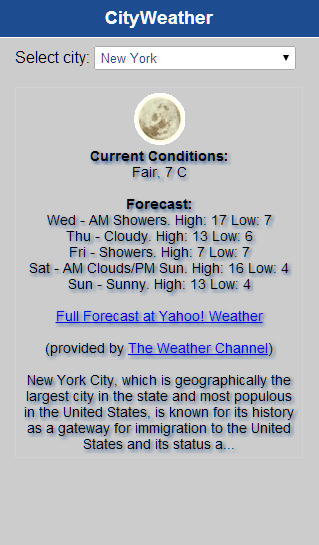