The OAuth 2.0 protocol is based on the acquisition of an access token, which encapsulates the authorization that is granted to the client. In that context, IBM MobileFirst Platform Server serves as an authorization server and is able to generate such tokens. The client can then use these tokens to access resources on a resource server, which can be either MobileFirst Server itself or an external server. The resource server checks the validity of the token to make sure that the client can be granted access to the requested resource. This separation between resource server and authorization server in the new OAuth-based model allows you to enforce MobileFirst security on resources that are running outside MobileFirst Server.

To support backward compatibility, the classic (pre-V7.0) MobileFirst security model is still used in the flows that are based on the existing MobileFirst APIs (for example, invokeProcedure in Java). The new client APIs trigger flows that conform to the OAuth-based security model. IBM MobileFirst Platform Foundation V7.0 provides seamless integration between the two security models. The platform allows you to mix classic and new APIs in the same application, while keeping a consistent security context on the server side.

The new MobileFirst end-to-end authorization flow has two phases: the client acquires the token and then uses it to access a protected resource.

In this phase, the client undergoes security checks in order to receive an access token. These security checks use authorization entities, which are described in the next section. 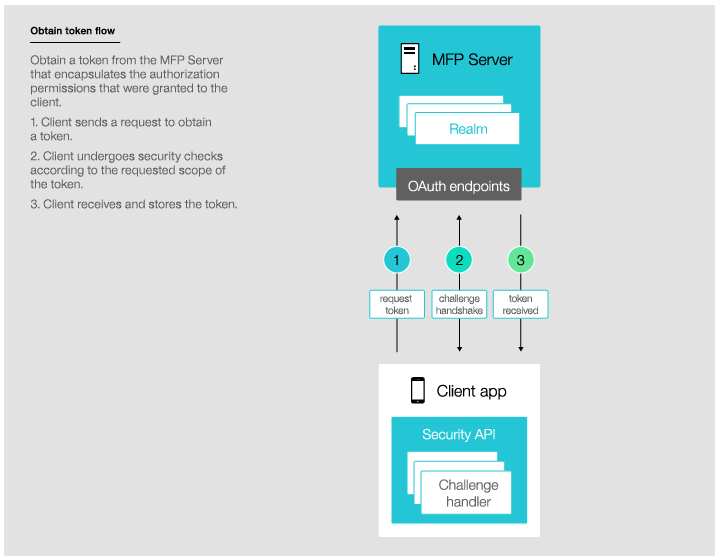 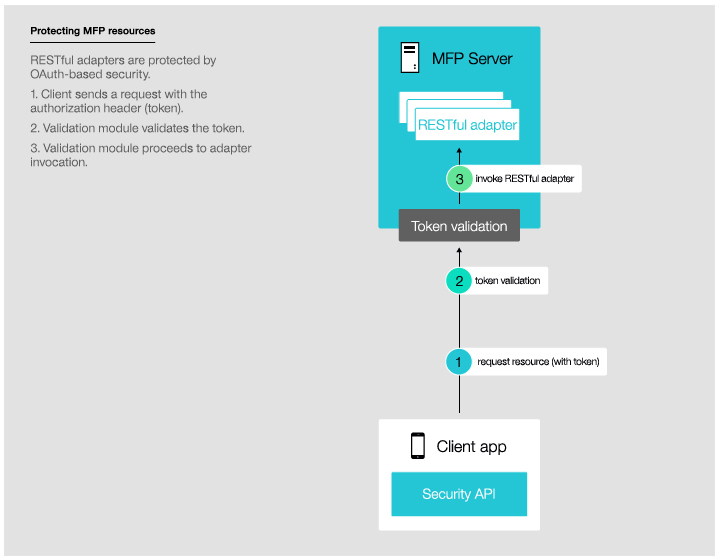 You can protect MobileFirst resources such as adapter procedures from unauthorized access by specifying a scope that contains one or more authentication realms.

Each realm consists of an Authenticator and a Login Module, which are server-side components.

The same realm can be used to protect several resources.

Each realm requires a challenge handler component on the client side.

MobileFirst Server comes with a set of predefined authenticators, including:

In addition to predefined authenticators, you can create your own custom authenticators by using Java code, as explained in tutorial Custom Authentication.

A login module is a server-side entity that is responsible for verifying the user credentials provided by the authenticator.

In addition to predefined login modules, you can create your own custom login module by using the Java code, , as explained in tutorial Custom Authentication.

To protect a resource, you must define a scope.
A scope is a list of realm names - the realms that the user must authenticate against to get access to the protected resource.

You configure authentication settings in the MobileFirst project in the server\conf\authenticationConfig.xml file.

You can modify the settings by using the Authentication Configuration Editor.

Each realm takes a name, a loginModule specification, an authenticator implementation, and optional parameters.

Note: In the classic (pre-V7.0) flows, the user identity realm is selected according to the definition in the security test. In OAuth-based flows, information about the user identity, which is set by the userIdentityRealms attribute, is part of the data contained in the ID token.

In this example, the deleteUser procedure uses the annotation @OAuthSecurity(scope="adminRealm"), which means that it is protected by a scope containing the realm adminRealm.

A scope can be made of several realms, space-separated: @OAuthSecurity(scope="realm1 realm2 realm3").

If you do not specify the @OAuthSecurity annotation, the procedure is protected by the MobileFirst default security scope. That means that only a registered mobile app that is deployed on the same MobileFirst Server instance as the adapter can access this resource. Any security test protecting the application also applies here.

If you want to disable MobileFirst default security, you can use: @OAuthSecurity(enabled=false).

You can use the @OAuthSecurity annotation also at the resource class level, to define a scope for the entire Java class.

JavaScript adapters such as HTTP adapters, SQL adapters, etc, need to be protected by a security test. Security tests are covered in the Classic security model tutorial.

Remember that adapters protected via the previous "classic" model can still be accessed via REST APIs and respond to OAuth authentication requests.

Additionally, entire applications are protected by a security test. Security tests are covered in the Classic security model tutorial.