Update : The steps provided below are applicable only if your Xcode version is 8.2.1 / cocoapod version 1.1.0 or below and the MobileFirst iOS SDK is manually added to your project. If the MobileFirst iOS SDK is added to your project using cocoapods with version 1.1.1 or later, the i386 and x86_64 architecture slices of dynamic frameworks are automatically removed during IPA generation.

Starting IBM MobileFirst Foundation 8.0, the iOS Client SDK for Cordova and Native applications was modified to be a dynamic framework. When an archive/IPA files are generated using Test Flight or iTunes Connect for store submission/validation, this might cause a runtime crash/fail with following error: 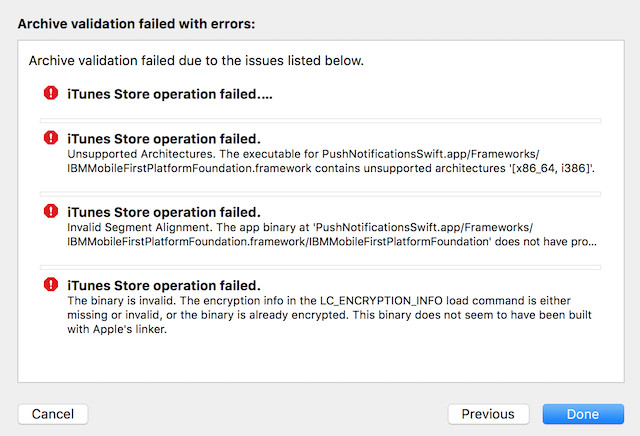 This is because the i386 and x86_64 architecture slices are bundled within IBMMobilefirstPlatformfoundation.framework. These architecture slices are bundled so that an application with the SDK could run on simulators as well. iTunes Connect and TestFlight do not support applications which include unused binary slices, hence while publishing to the App Store or while using Archives for testing, the app crashes during runtime or fails during validation. This is a known Xcode defect for dynamic frameworks.

The following steps mentioned by Daniel Kennett in his blog post will help resolve the above issue by removing unused/unsupported architectures (i386/x86_64) from dynamic frameworks and will ensure that the application will work as expected without any crash/failures.