In this blog post, we will walk you through the steps of creating a DevOps pipeline for Mobile Foundation on ICP using Jenkins. The Jenkins jobs use the combination of ICP, Helm and mfpdev command line to automate the different stages/jobs in the pipeline. The jobs can be configured in such a way that whenever developers commit a code change to a git repository, the pipeline automatically gets triggered to execute some of the Jenkins jobs. In a continuous build and test automation pipeline, the job execution can start with a fresh deployment of Mobile Foundation on ICP and then do the building of apps and adapter and subsequently register it with Mobile Foundation Server running on ICP followed by testing both apps and adapter and finally tearing down the Mobile Foundation deployment on ICP.

This blog post assumes that you have already set up IBM Cloud Private and loaded the IBM Mobile Foundation Passport Advantage Archive on ICP.

The DevOps pipeline that is described in this blog is built by using Jenkins. This blog post assumes that Jenkins is installed locally within the organization’s intranet. ICP provides helm charts for Jenkins deployments that you could use to build the DevOps pipeline, but ICP may run the Jenkins job on a new pod each time a job is run, and that would require every job to have the scripts to install the prerequisite software such as mfpdev command line, maven, helm etc., which is required to run the job. This may have a performance impact on the execution of jobs. It is hence recommended to have locally installed Jenkins server and client, which can connect to the ICP running on your data center. The Jenkins job that is used for creating DevOps pipeline for MF on ICP is shown below.

We will now discuss each of these jobs in detail.

Setting up the Jenkins build machine

As mentioned earlier, we will be using Jenkins that is installed locally for running Jenkins job. These jobs install all the prerequisite software required to run the Jenkins jobs. The job needs to be run only once on the build machine. The jobs install IBM Cloud CLI (Bluemix CLI), IBM Cloud Private Command Line, Helm Command Line, NodeJS, Maven, MFP Dev CLI, and Android SDK. These command line tools are needed for running the rest of the jobs in the pipeline such as building apps and adapters and testing them. The scripts for setting up the build machine can be found in the attachment. A snapshot of the script for the same is shown below 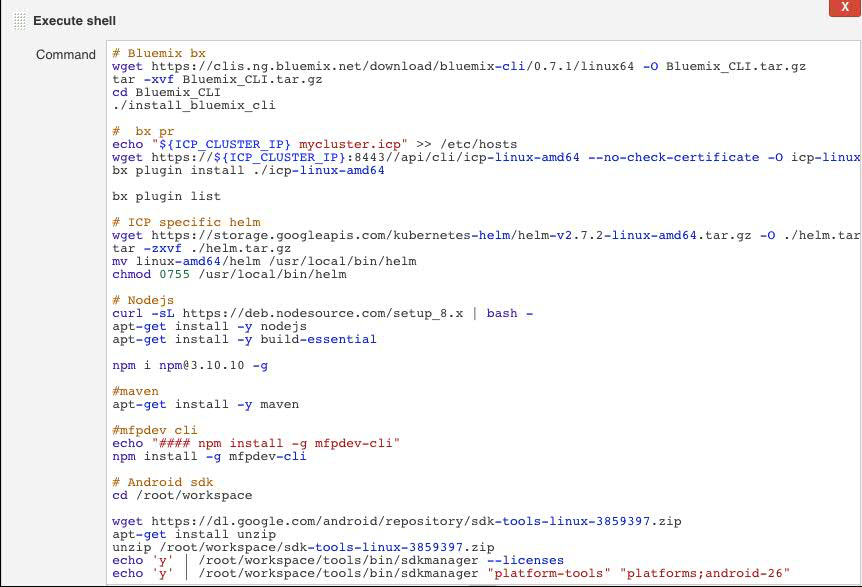 Once the build machine is set up, which is a one-time activity, the other jobs can be run. The jobs can be linked together to create an end-to-end devops pipeline. You can configure Jenkins jobs in such a way that whenever an app or adapter change is committed to the git repository, a job can be kicked-off. You can choose to test the changes on a fresh MF deployment by configuring the deploy_mfp_on_ICP job to listen to the changes in the source repository. If you don’t require to test the app and adapter changes on a new deployment of MF on ICP, you can skip this job from the pipeline. The source code for apps and adapters is publically available in the git repo. 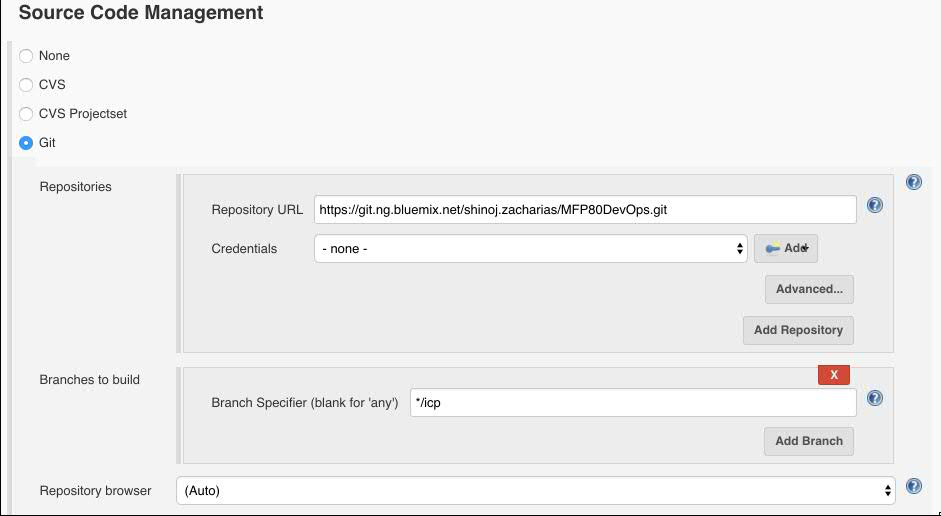 The scripts for deploying MF on ICP requires details of the ICP cluster and DB credentials (in this pipeline we use DB2 as the database), which can be provided as parameters for the Jenkins jobs. The parameters are used internally in the scripts that automate the job. 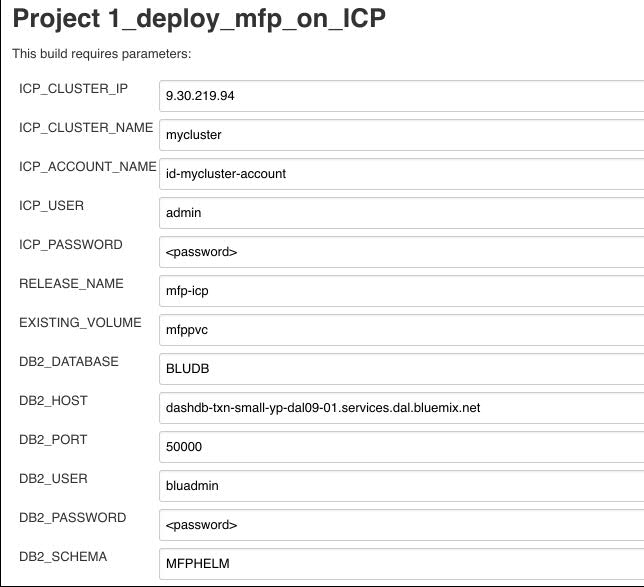 The screenshot of the script that perform the deployment of MF on ICP is shown below. The script uses the helm commands to deploy MF Server and Analytics Server on ICP. The complete script is available in the attachment. 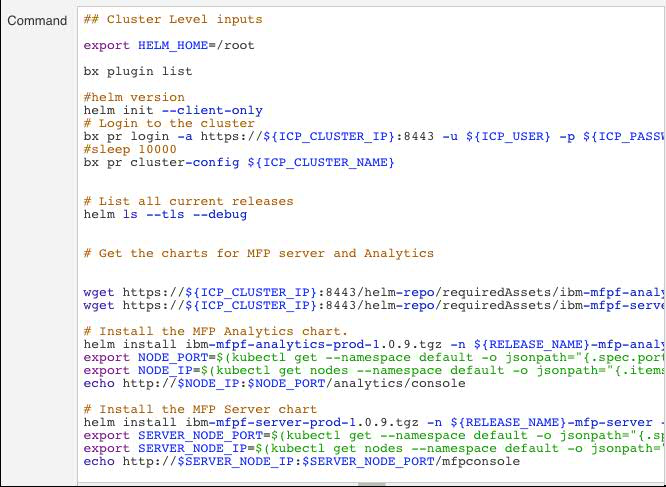 Once the Jenkins job is successfully completed, MF deployment can be seen from the ICP deployments dashboard, as shown in the screenshot.

After MF is deployed on ICP, adapters can be built and deployed on MF for testing the changes. This is automated by build_and_deploy_adapter Jenkins job. The job can be configured to be run after the previous job, deploy_mfp_on_ICP is successfully completed. This job builds the adapter using mfpdev CLI and uses the MF deployment endpoints to deploy the adapter to MF running on ICP.

The scripts for building and deploying adapter requires details of ICP cluster and credentials to log in to ICP. These details are provided as parameters to Jenkins job.

The screenshot of the scripts that build and deploy the adapter to MF is shown below. The script uses mfpdev CLI for building and deploying the adapter. The complete script is available in the attachment. 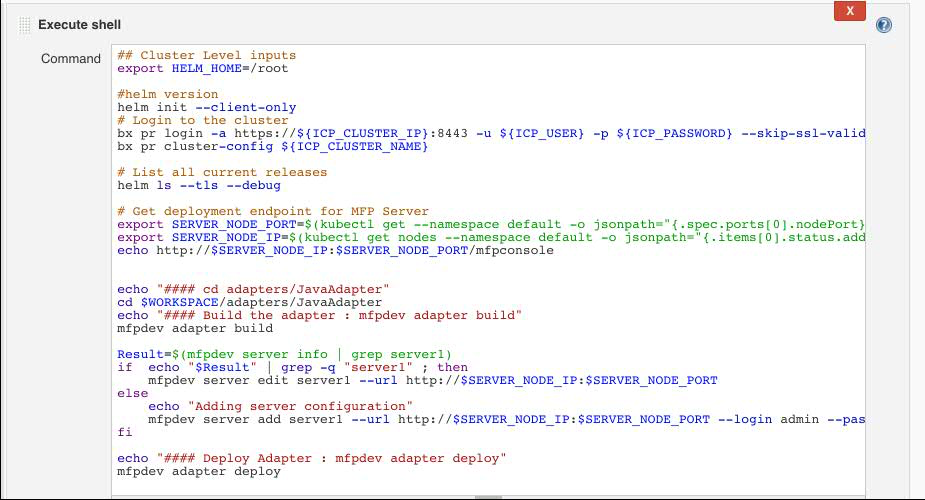 After successful completion of thia job, the adapter would be deployed on MF running on ICP as shown in the image below. 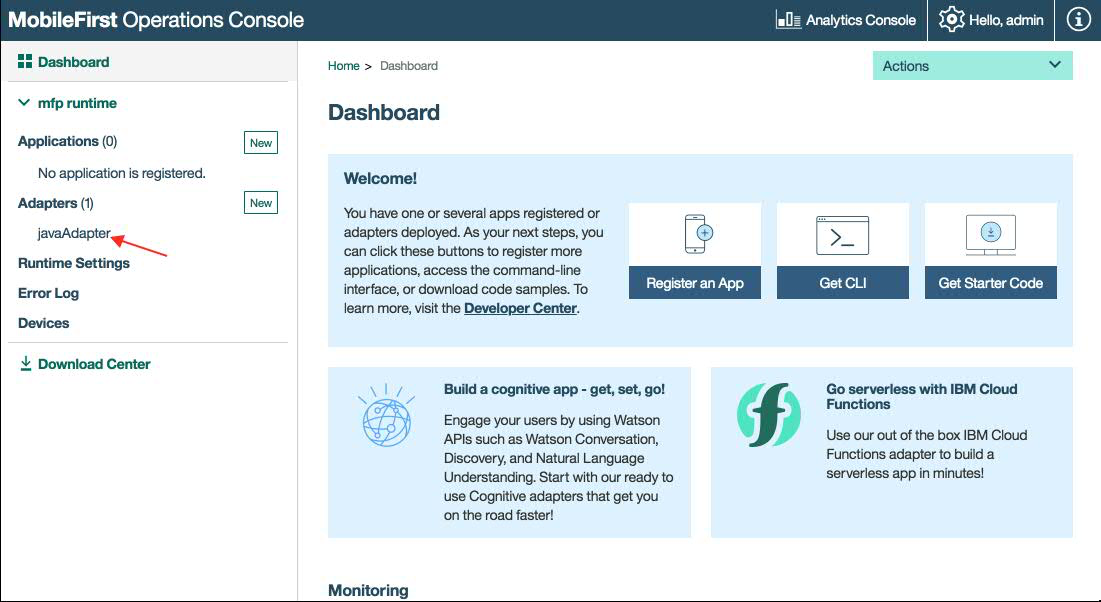 The test_adapter job performs unit tests on the adapter that was built and deployed in the earlier Jenkins job. This way any adapter changes can be tested using unit tests. For this DevOps pipeline, the tests that are written to test the adapter end-points are available under the tests folder of adapter git repository. You can add all the tests under this folder and these scripts can be executed from the job’s scripts. The job can be configured to be run after the previous jobs build_and_deploy_adapter is successfully completed.

This job also requires the same set of parameters that was mentioned in the previous job. The parameters are referred in scripts that are used to automate the job. The script first gets the deployment endpoint of MF. The MF endpoint is then used to register confidential client that is required to test adapter endpoint from the unit tests. The screenshot of the script is shown below, the complete script is available from the attachment. 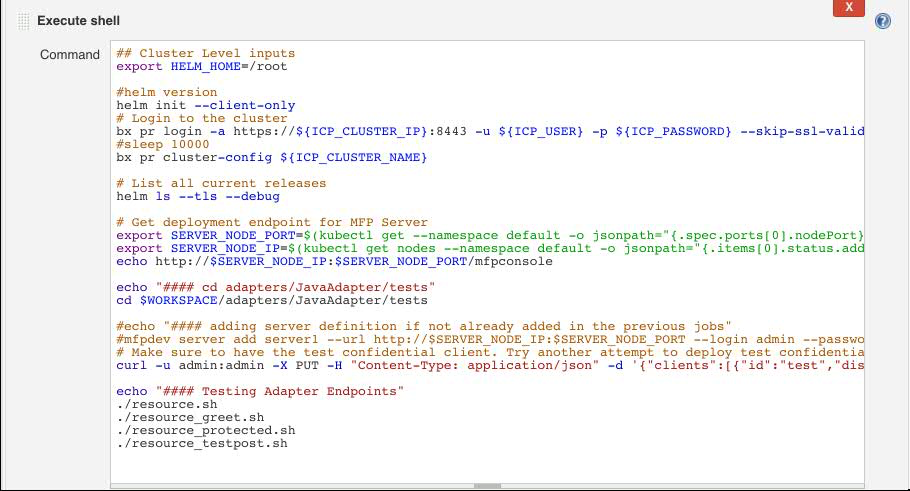 Any app changes committed to the git repository can be built using this job. In this DevOps pipeline, we are using Fastlane for building the Android app. The app that is built is then published to another git repository to be used later in the test_app_with_bitbar Jenkins job. The git repository for apps is the same as the git repo that is used for adapters.

The parameters required for the running the script includes the ICP cluster details and credentials to log in to the ICP as well as the git URL for publishing the app, which is built. In this DevOps pipeline, we use the GIT Push Token that can be found from the GIT settings page. You need to use your own GIT repo for publishing the app and you will need to provide the GIT details such as URL, token and publish URL as shown in the image below. 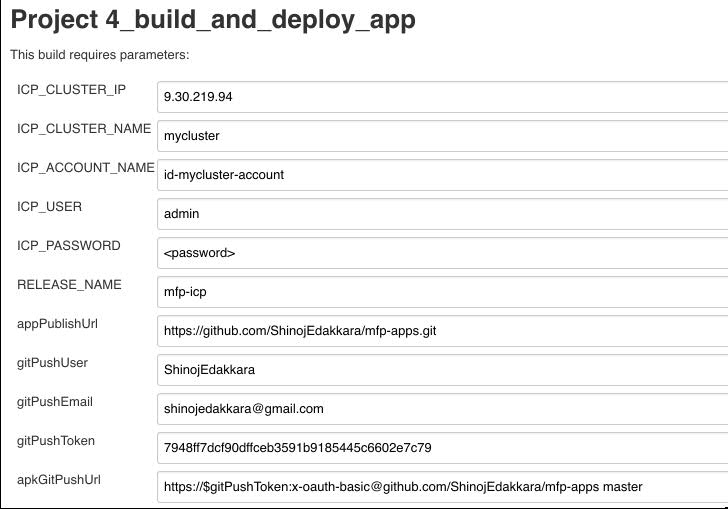 The scripts for automating building and deploying the app uses Fastlane for building the Android app and mfpdev CLI for registering the app with MF deployed on ICP. It uses git commands to publish the .apk file that was built by Fastlane. 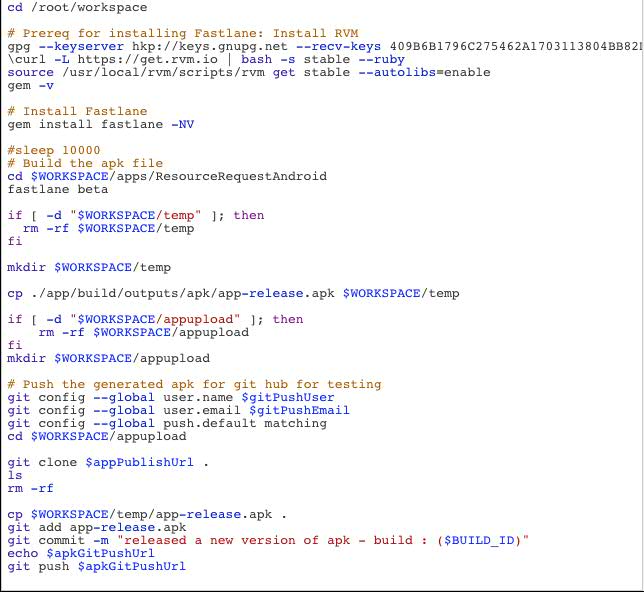 Once the job is successfully completed, the app would have registered with MF running on ICP as shown in the image.

Once the app is built and registered with MF, the app can be tested. We use Bitbar cloud service for functional testing of the app. Before you can test the app, you need to create a Bitbar cloud service instance. The Bitbar service can be created from IBM Cloud. If you are using Bitbar cloud for testing, you need to work with Bitbar to open the port in ICP to connect to it from Bitbar, to test the app running on MF in ICP. For functional testing of app on Bitbar cloud, we use the Appium tests. We use different git repository for tests, which are used for testing the apps.

The script to run the tests on Bitbar is invoked using maven, which is shown in the screenshot

This job can be configured to run after the previous job build_and_deploy_app is completed successfully. Once the job is successfully completed, the status of the app tested can be viewed from the Bitbar dashboard.

This Jenkins job will clean up the MF deployment on ICP after all the previous jobs are successfully completed. Cleaning up MF on ICP helps in leaving no traces of previous pipeline run and helps in tear down of the MF after completion of pipeline run. You can choose not to perform this phase in the pipeline if you don’t wish to clean up the environment after every successful build of the pipeline. This means that the jobs for deploying MF on ICP and deleting MF on ICP can be taken out from the continuous build and testing of apps and adapter pipeline.

For this job to be run, we need to provide the ICP cluster connection credentials and release name as shown in the image. 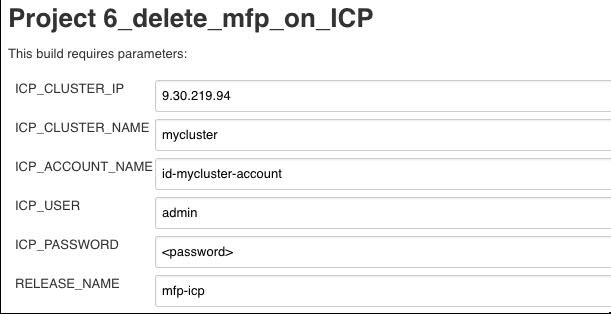 It is often required to upgrade the MF on ICP whenever the latest version of MF for ICP is released. This job can be used to upgrade MF and Analytics on ICP. This job needs the credentials of ICP cluster and the release name. 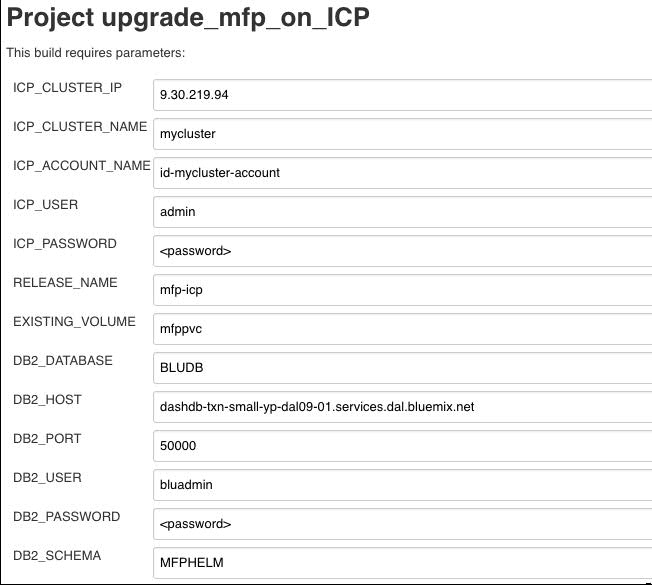 This script uses the helm command to upgrade the deployment for MF and Analytics on ICP. 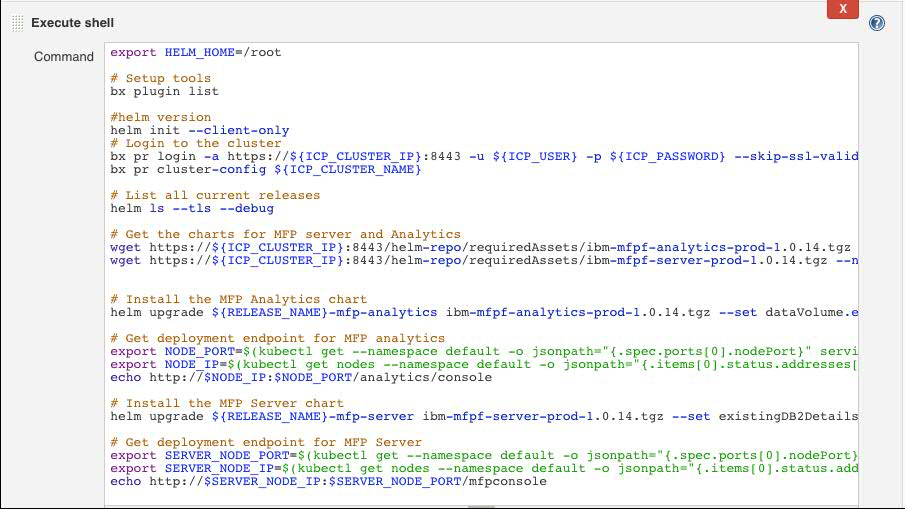 What we have seen in the blog is a DevOps pipeline for development, where developers make changes to apps and adapters and commit the changes to a git repository. Whenever changes are committed to a git repository, the pipeline is configured to run the phases (jobs) such as deploying MF on ICP, building and testing apps and adapters and finally deleting the MF deployment from ICP. This is how a standard devops pipeline can be created for development. Based on your requirement the jobs can be linked to create a continuous delivery pipeline for development.

The DevOps pipeline for Test is very similar to development, the only difference is that for the test environment, instead of kicking off the pipeline for each of the git commit, it can be configured to run at regular time intervals (nightly) or twice in a day. This way all the changes delivered to the git repository for a period of time gets tested in the test environment at regular intervals.

In the case of DevOps for production environment, you will not be using/running all the jobs that we discussed in the blog, rather you will be having jobs for registering the app and deploying the adapter after the apps and adapters are successfully tested in the test environment.

The zip file MF_on_ICP_Jenkins_Job_Scripts includes all the scripts for all the Jenkins jobs described in this post. These scripts assume that Jenkins job parameters are set correctly before running the pipeline.