There are two main testing flows:

Before we describe the actual test flow, let us consider the OAuth flow:

The OAuth 2.0 protocol is based on acquiring an access token, which encapsulates the authorization that is granted to the client. In that context, the IBM MobileFirst Platform Server serves as an authorization server and is able to generate such tokens. The client can then use these tokens to access resources on a resource server, which can be either the MobileFirst Server itself, or an external server. The resource servers perform validation on the token to make sure that the client can be granted access to the requested resource. This separation between resource server and authorization server in the new OAuth-based model allows you to enforce MobileFirst security on resources that are running outside the MobileFirst Server.

The resource in this flow is Java adapter.

Registration
This phase occurs once in the lifetime of a mobile app that is installed on a device. In this phase, the client registers itself with the MobileFirst Server. When application authenticity has been configured, it is activated during registration.

Token
After successful authorization, the client is redirected to the token endpoint, where it is authenticated using the PKI trust that was established during the registration phase. The endpoint then generates two sets of tokens and sends them back to the client: an access token, which encapsulates all the security checks that the client has passed in the authorization phase and an token ID, which contains information regarding the user and device identity of the client.

Access resource
From this point it is possible to access the resource, either an adapter or an external resource, with a valid token.

JMeter is used here for simulating a MobileFirst client. It lets you use hundreds of threads, each thread holding a large number of fake devices. Using this method, you can stress the MobileFirst Server according to your needs. This flow describes a single client session with several requests. 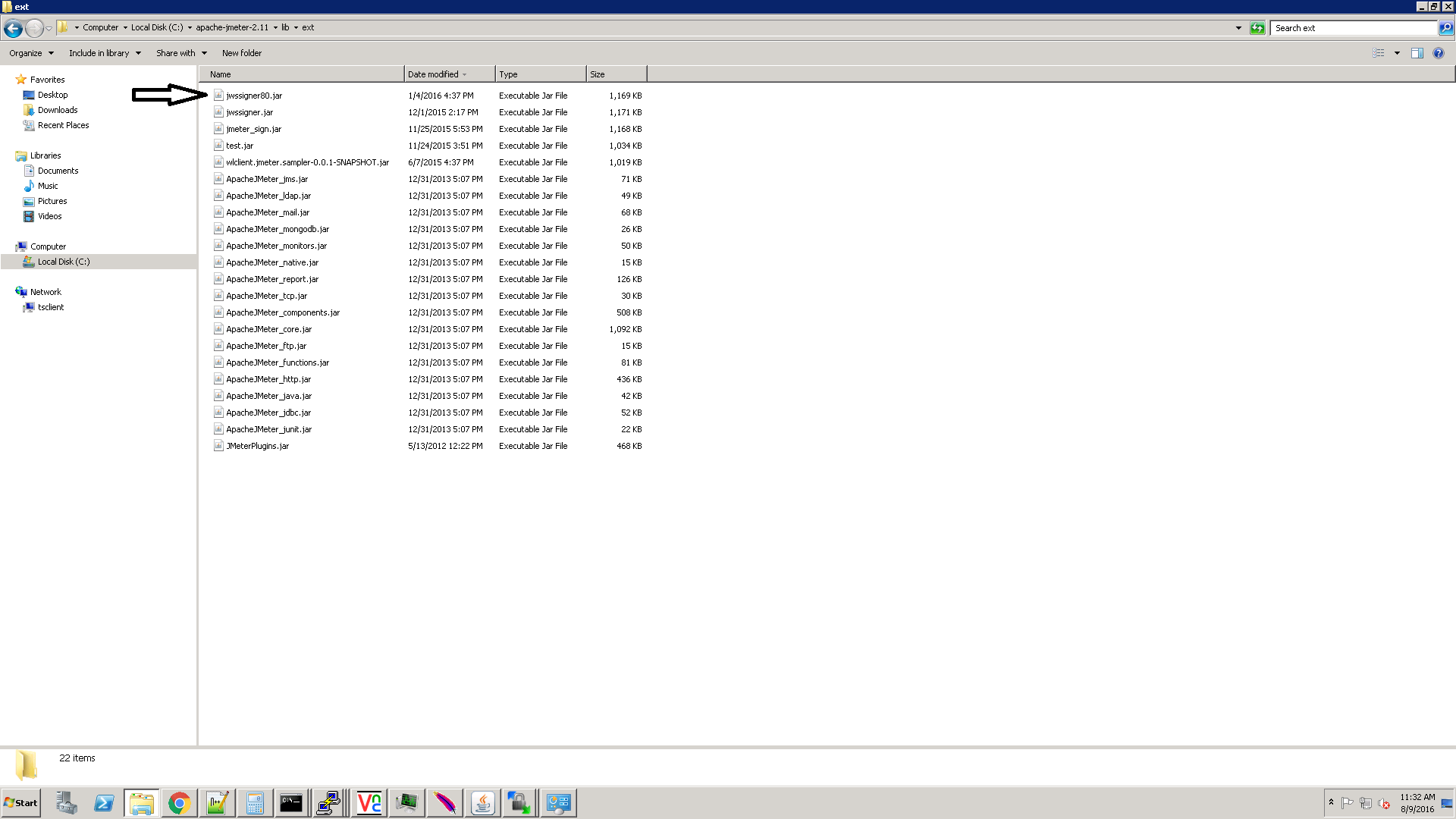 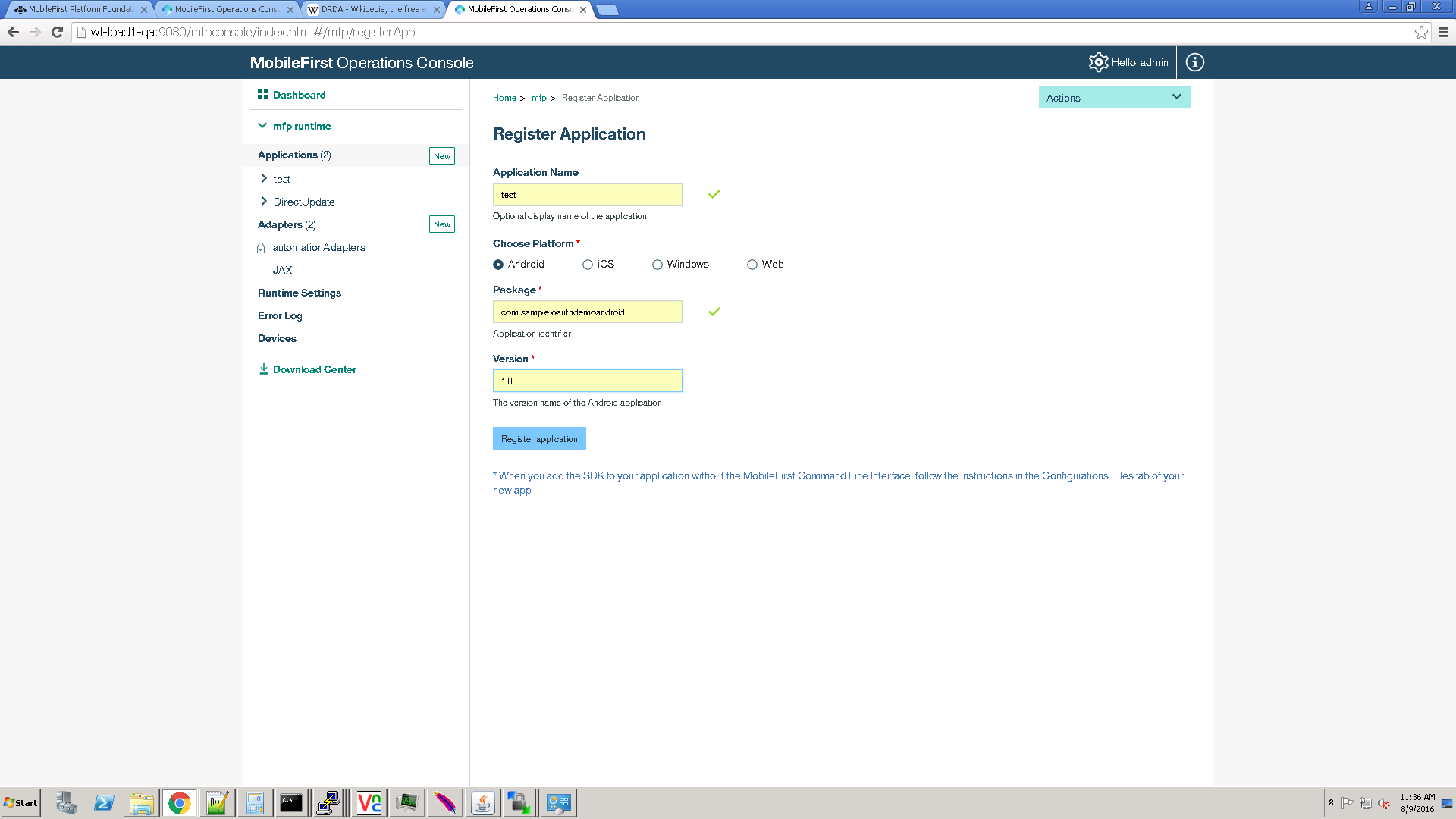 The registration flow occurs during the first client-server negotiation and is written to the MFP_PERSISTENT_DATA table. Only registered clients can access MobileFirst Server-served resources.

Registration is a single action that should have no effect on performance. We did not implement this operation inside JMeter script.
The MFP_PERSISTENT_DATA table has been populated with pairs of coordinated client_id and device_id. This data will be used later by JMeter.

The following SQL command inserts clients into the CLIENT_INSTANCES table:

You can use the DB2 SQL script that is attached in the zip file below.

The default insert command assumes you have a registered application and deployed adapter as described above in the Prerequisites section. Wrap this command according to your needs and to the tool you use.
Please note that the command inserts the public key that is used by the Java class. This value should not be changed.

Authorization involves a set of requests, with which the client eventually receives a grant code after successfully handling all challenges.

Send the appropriate headers for each request.
The following is the default header for all requests:

The authorization process will be demonstrated in two phases:

Sends a request to preauthorize endpoint in order to get the challenge back:

Use your own values for scope and client id.

The Server returns the usernamePassword challenge 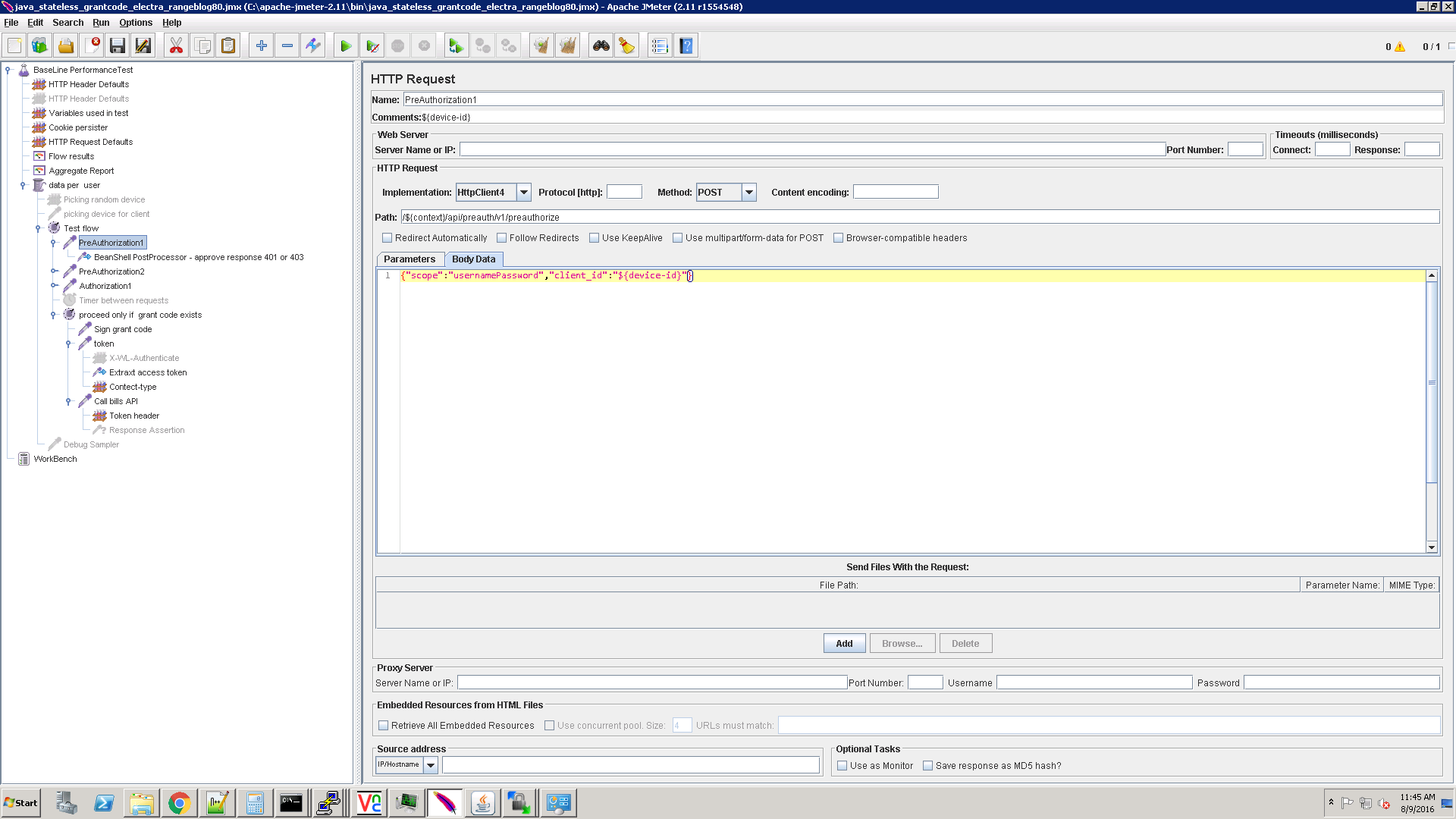 Change the response status to HTTP 200.
When JMeter performs initialization the first time, MobileFirst Server will respond with an HTTP 401 status. This is as expected, so the performance tool should treat this HTTP status as a success, too. Consider changing the HTTP status to HTTP 200. Otherwise, JMeter reports this request as “failed” and records it as an error, thus impacting significantly on the performance testing report. 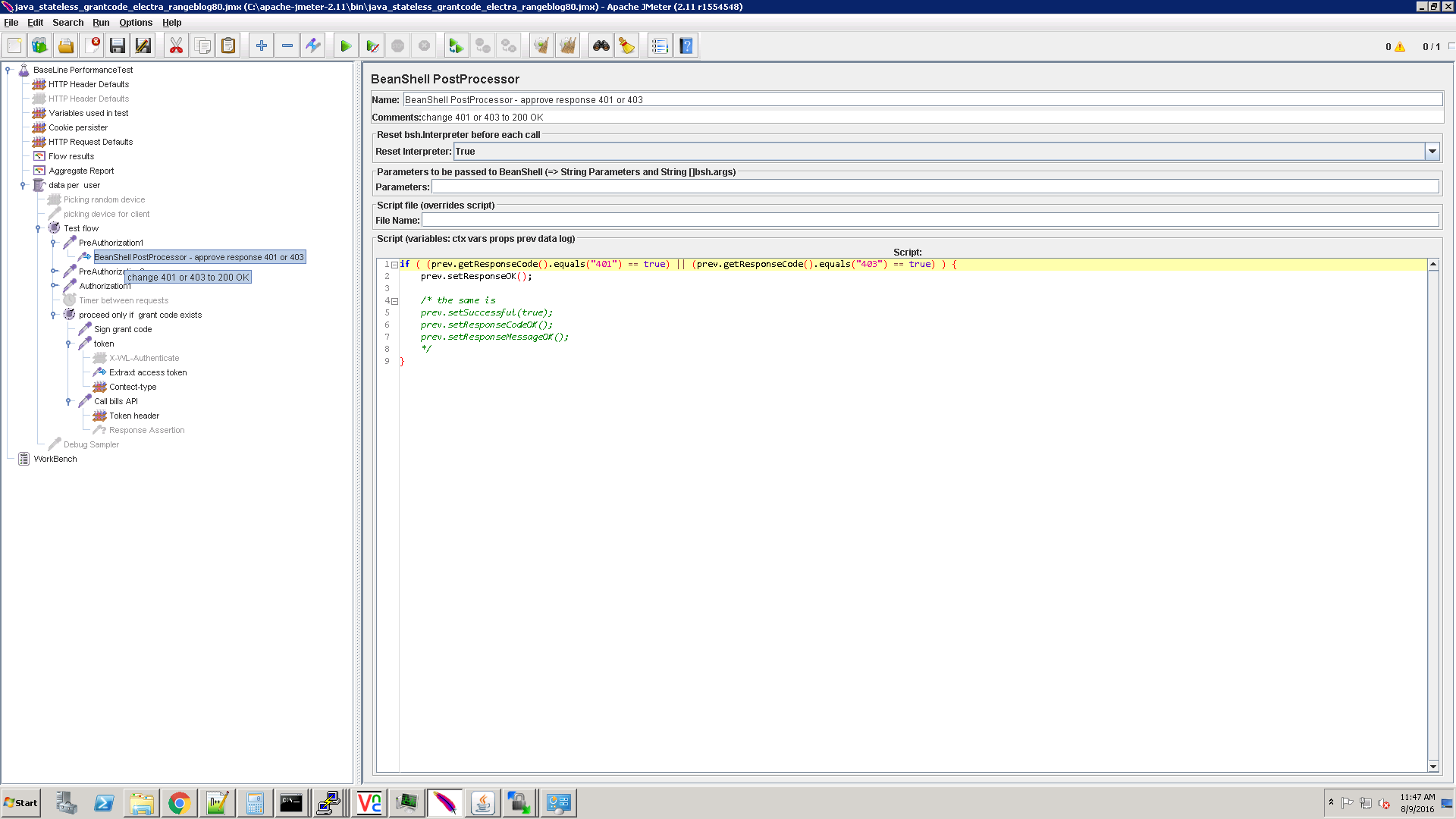 Sends a request to preauthorize endpoint again with the correct username and password: 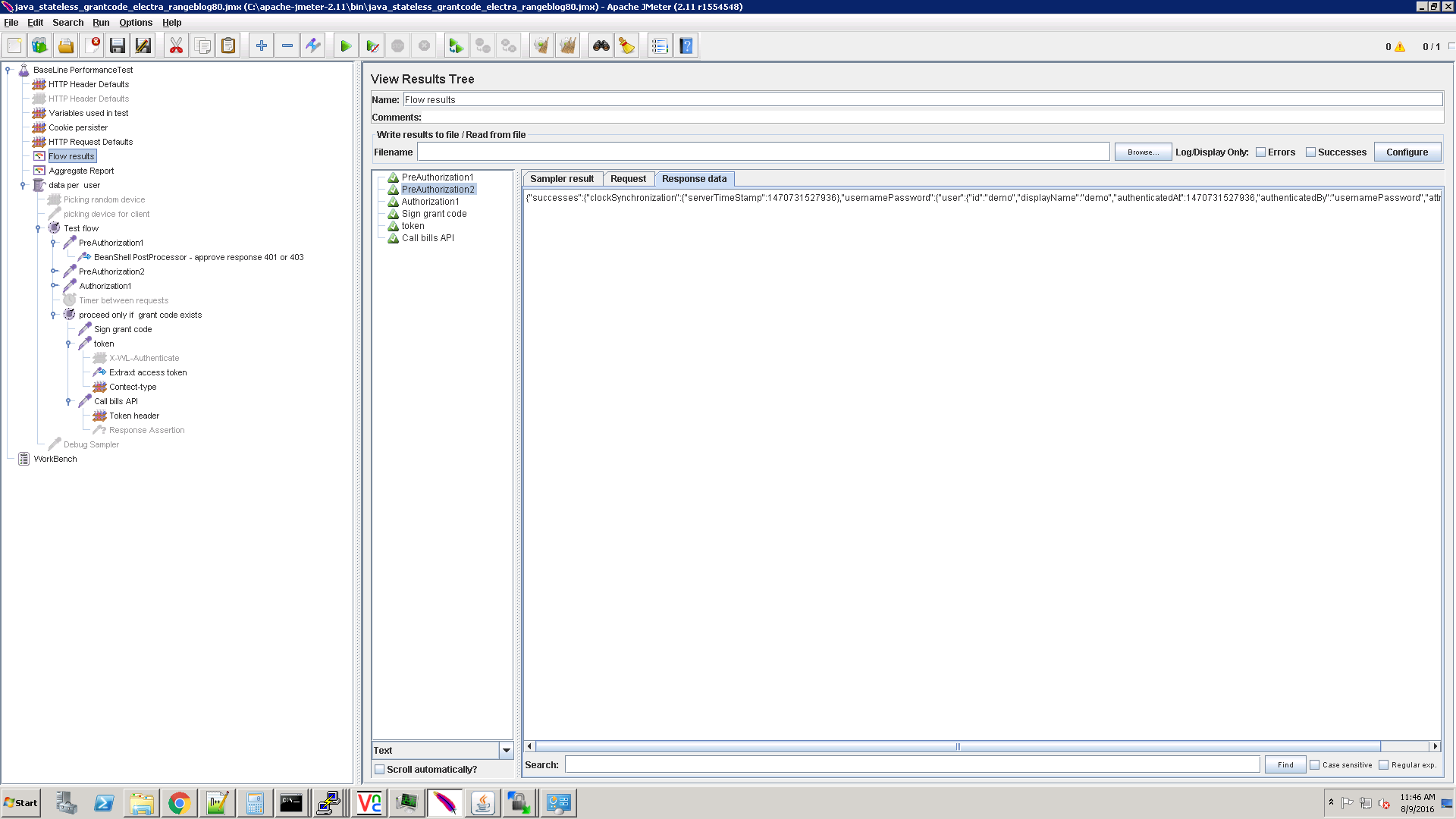 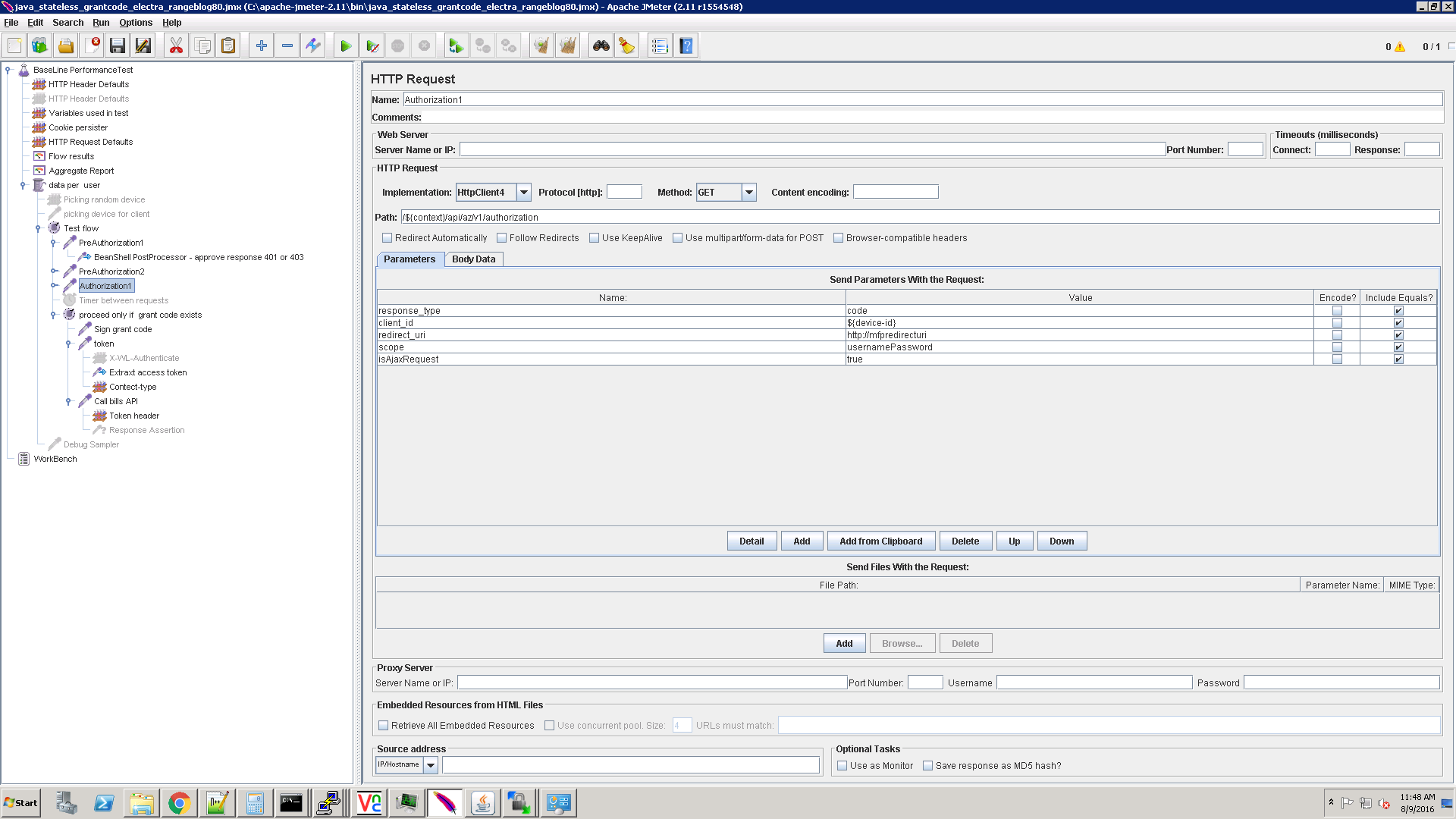 The expected response is 302 and the server sends the grant code: 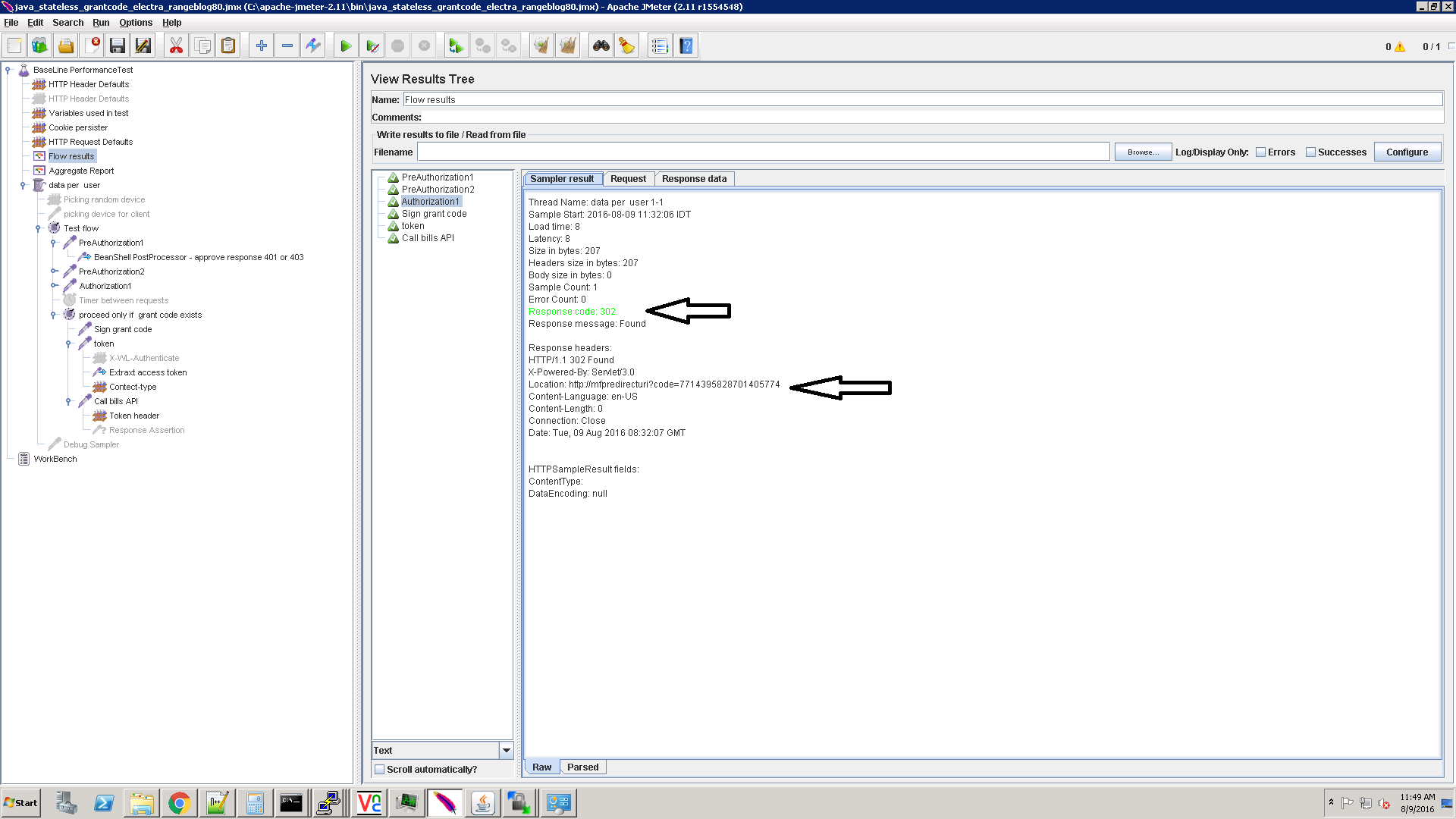 The grant code is extracted by JMeter: 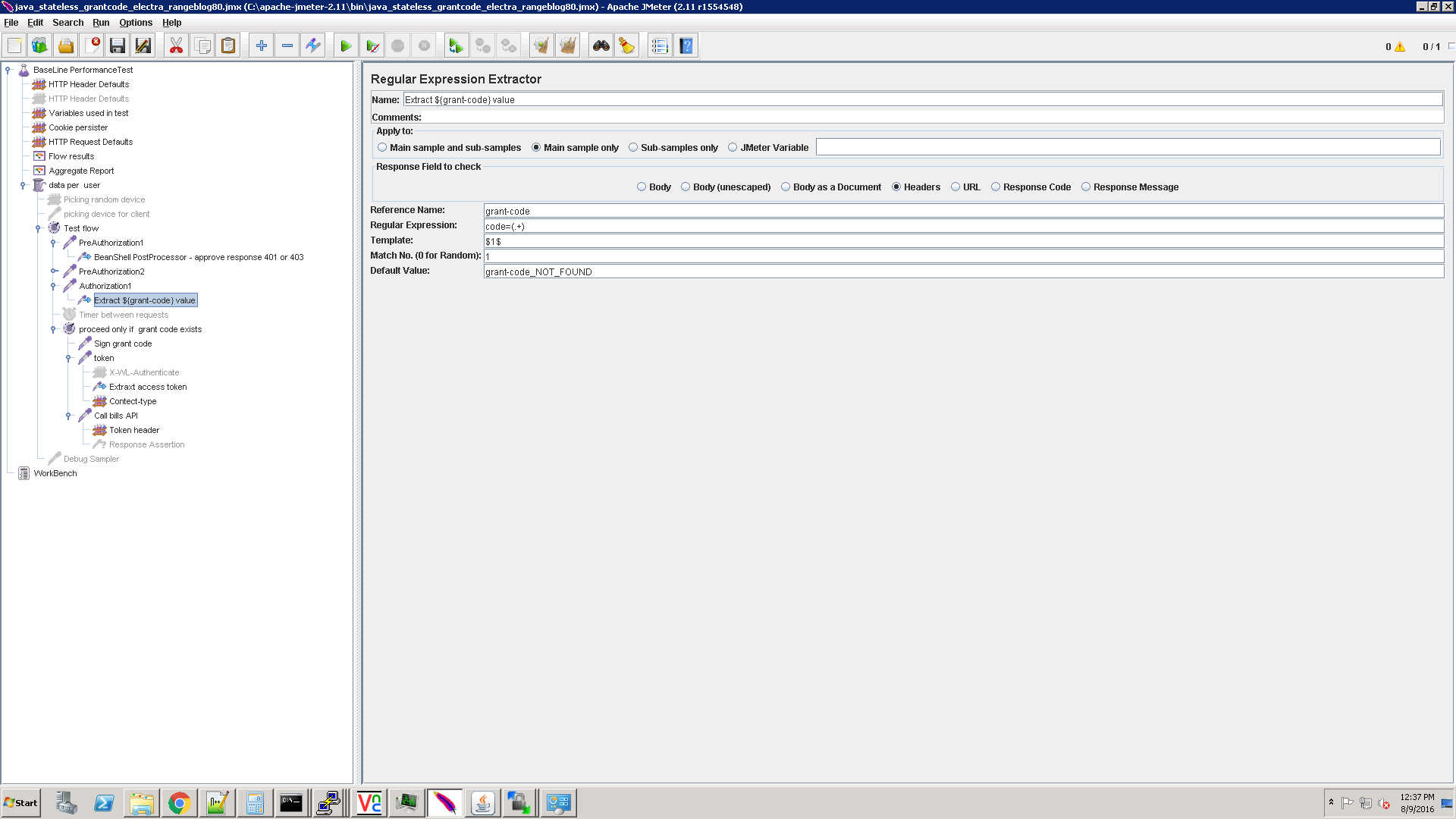 This step is an internal JMeter operation in order to sign the grant code.
Ensure that the jmeter80.jwsCreatorForJMeter class name is selected.

The class gets the grantCode parameter (extracted grant code). It also gets the appid (leave this parameter as is) and the clientid. It then signs the grant code with the constant public key, which was already inserted using the registration script.

The class signs the grant code and returns the jws parameter to be used as a header to get the access token: 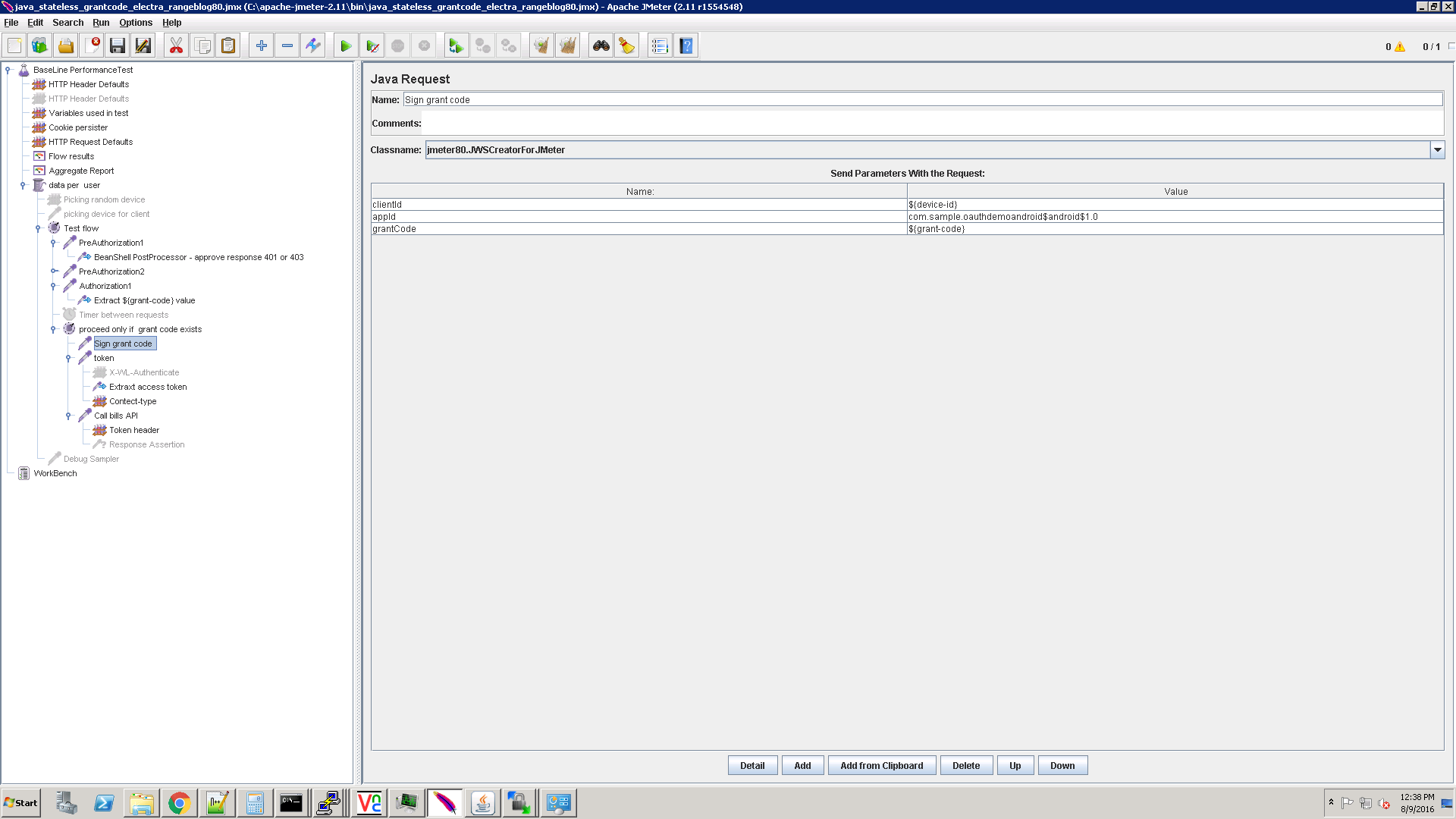 This is the final authorization step. At the end of this flow, the client receives the access token that will be used to access the resource endpoint.

Add the Content-Type header with the correct value, needed by the token endpoint: 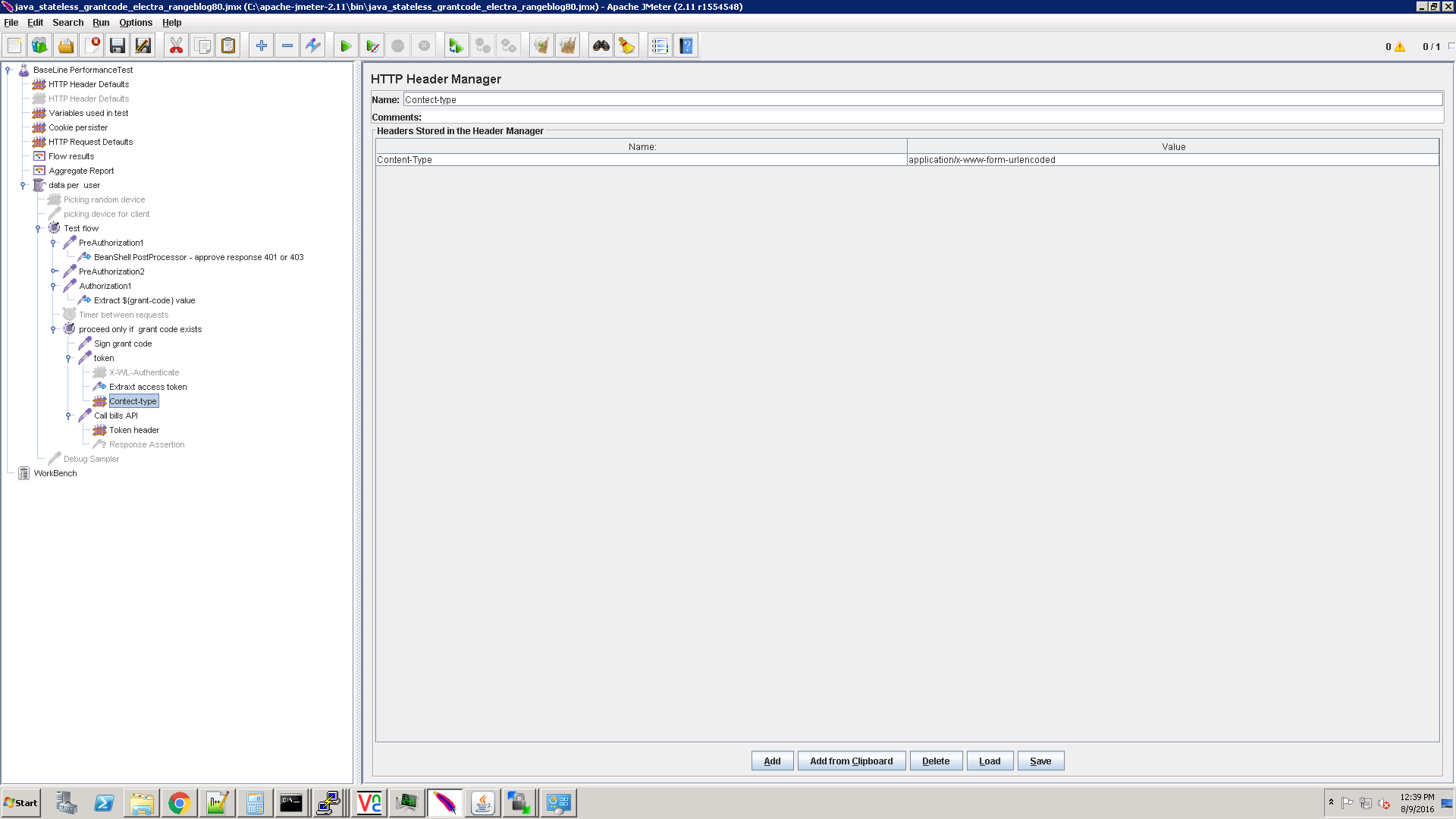 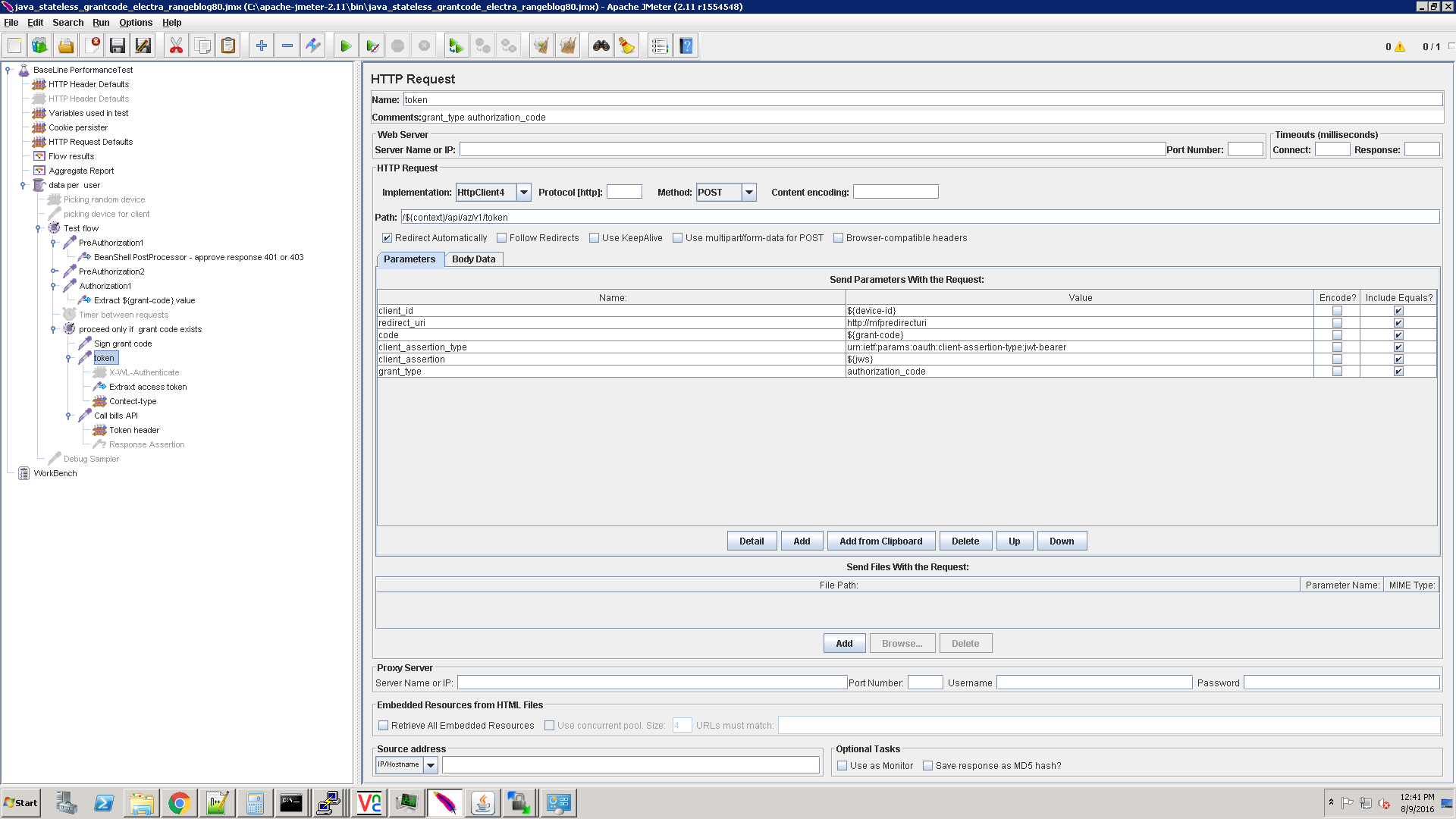 In the response you get an access_token: 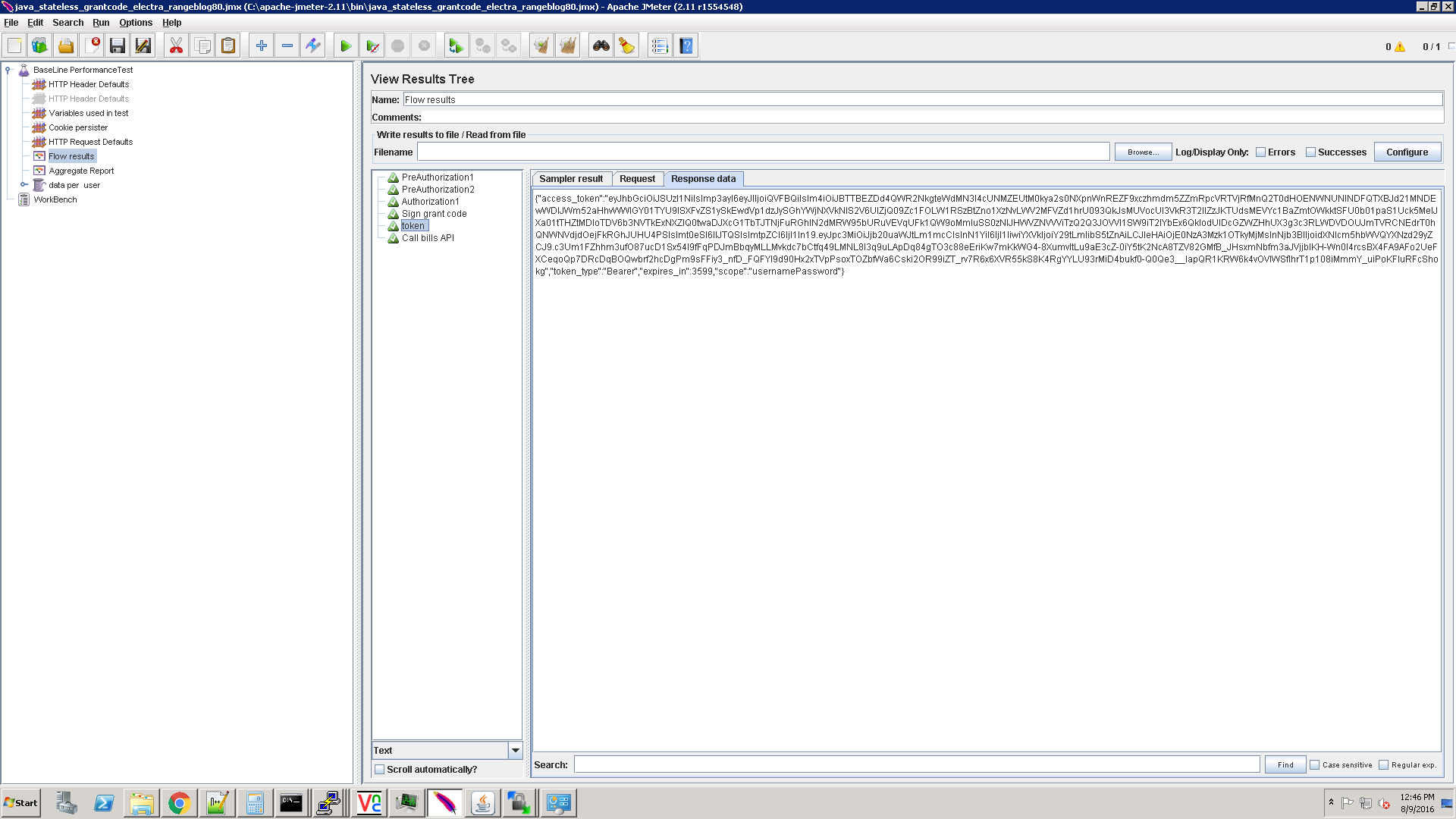 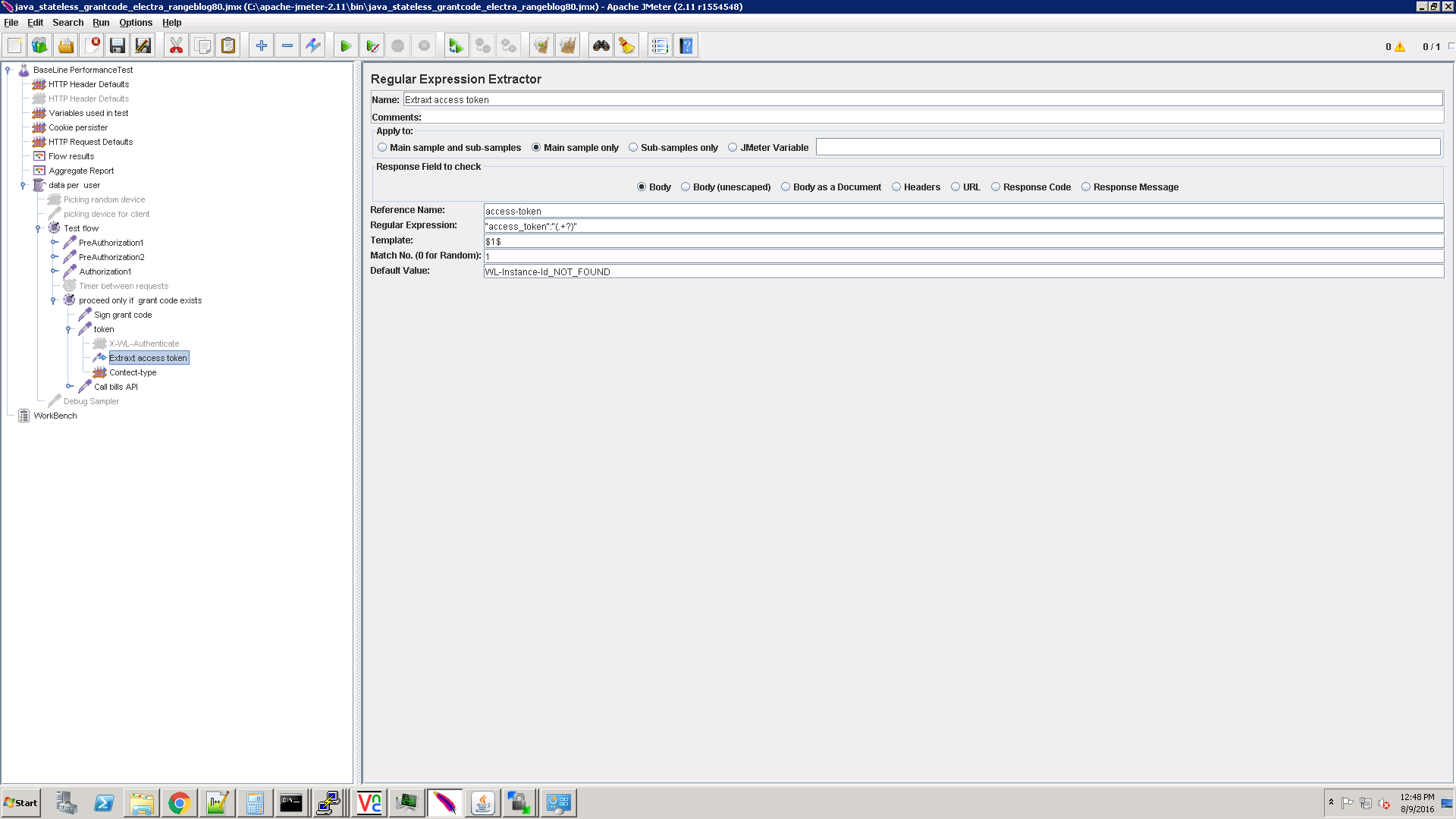 The above steps should work as-is on any target server, assuming the server URL and context path are correct.
The context path is a user-defined parameter, and server URL can be configured in the HTTP request defaults section.

This is a sample API call to a test adapter. Use your own adapter API.
This call demonstrates how to pass the access_token into the Authorization header. 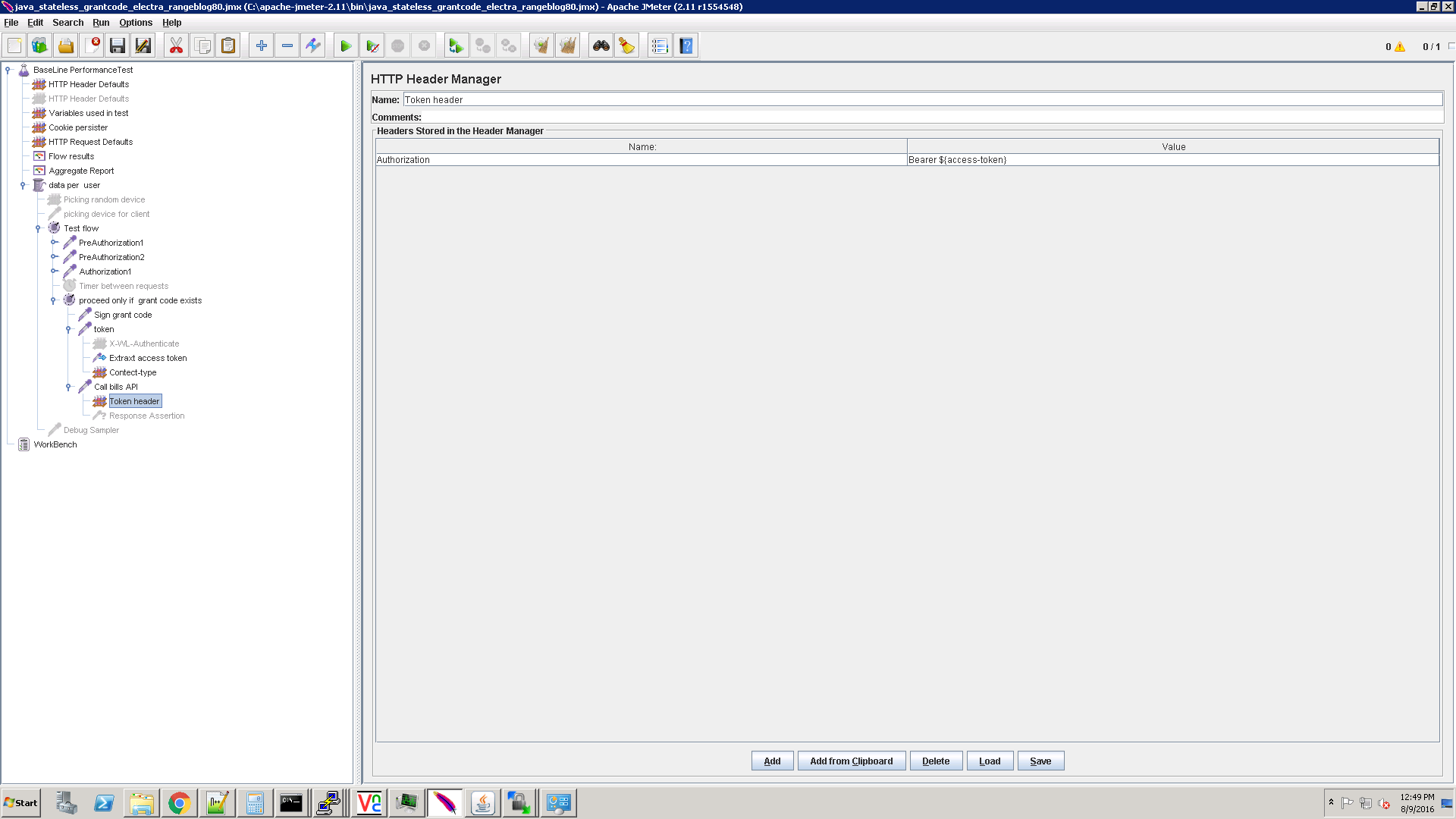 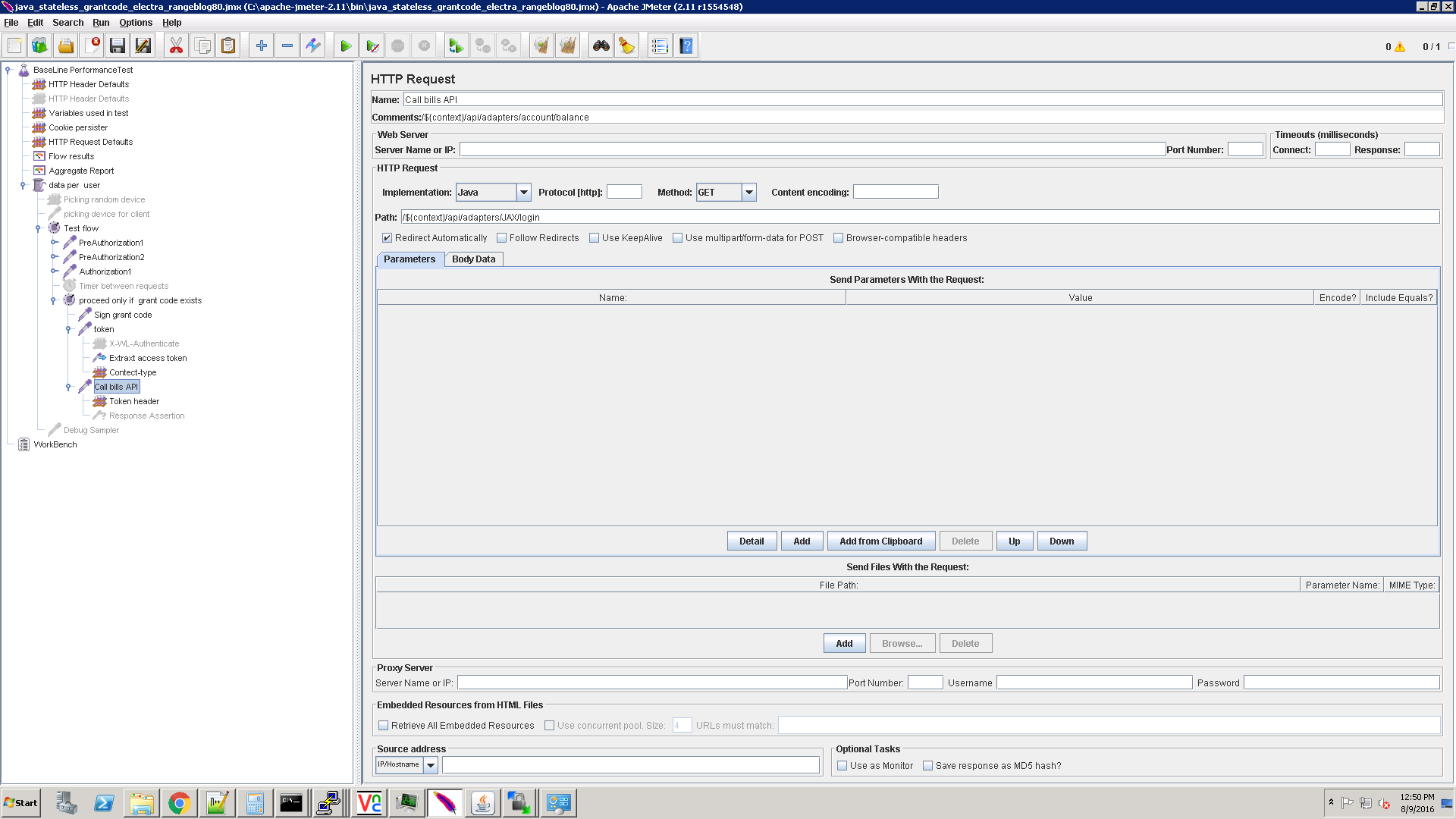 Tips when running the script: